Sarawak, the legendary land of headhunters and hornbills, is Malaysia‘s largest state, occupying the northwestern portion of the great island of Borneo. Here, the ever-wet rainforests reach unparalleled diversity and are home to a dizzying array of tropical wildlife. A great portion of Borneo’s 650 bird species have been recorded in the state, including most of the island’s endemics such as the bizarre Bornean Bristlehead. With the highest number of national parks and nature reserves in the country (over 600,000 ha of totally protected areas), Sarawak offers superb birdwatching opportunities. These range from balmy lowlands and shorelines to cold mossy forests at the summits of the higher mountains. Not surprising then that Sarawak has the most number of Important Bird Areas (IBAs) in Malaysia. The map below shows Sarawak’s most important protected areas, representing excellent birding sites, as well as other IBAs. 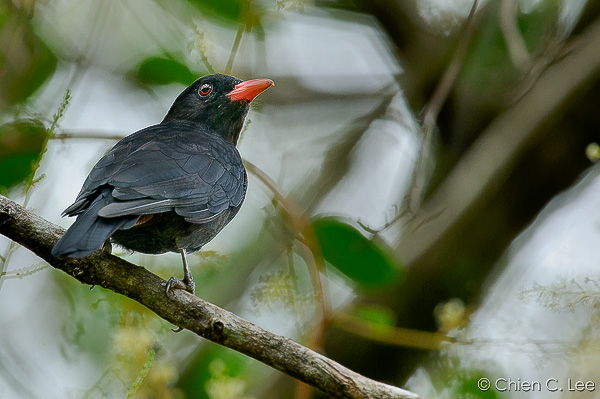 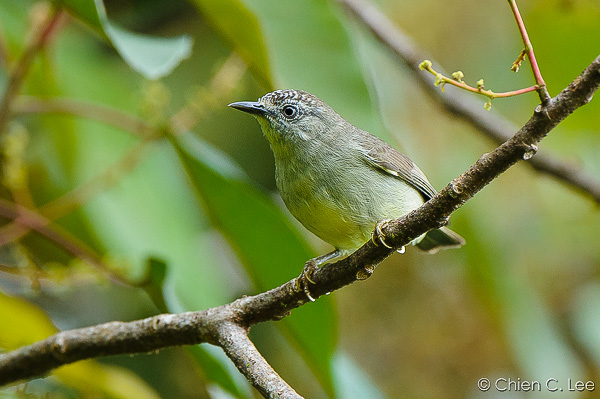 With an international airport and good roads, Kuching is a logical place to begin any birding adventure in Sarawak. There are numerous nature reserves within an hour of the city that offer a variety of bird watching opportunities. One of the most popular is Kubah National Park, which has beautiful lowland rainforest and has a great diversity of birds. A number of endemic species including Bornean Banded Kingfisher, Bornean Wren Babbler, and Blue-banded Pitta can be found here. Located near the coast is the spectacular Santubong National Park, with its rugged sandstone terrain and tall rainforest. This is the closest site to Kuching which offers a chance of seeing one of Sarawak’s most emblematic birds, the Rhinoceros Hornbill.

Perhaps better known for its population of reintroduced orangutans, Semenggoh Nature Reserve is also an excellent bird watching destination that hosts many lowland birds, including the rare Long-billed Partridge. Further to the south, near the Indonesian border, Borneo Highlands comprises a range of forested hills culminating in Mount Penrissen at over 1300 m in elevation. Designated as an IBA in 2010, this area offers one of the best chances to see the White-crowned Hornbill, and some of Borneo’s endemic submontane birds, such as Pygmy White-eye, Chestnut-crested Yuhina, Bornean Barbet, and Mountain Serpent-Eagle. 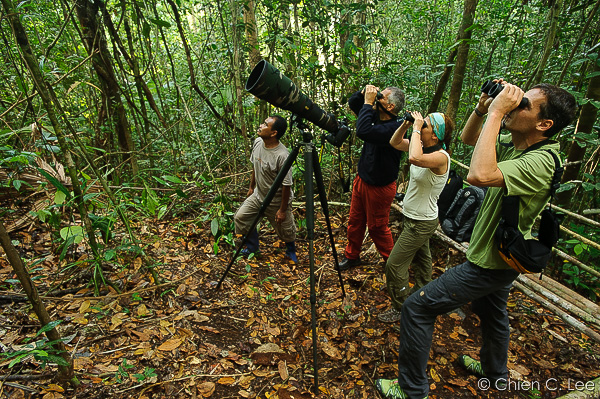 Although the main attractions in Niah National Park are its incredible limestone caves, some of which contain archaeological remains and cave paintings, the park has a well-designed network of trails and boardwalks through pristine forest. A great assortment of forest birds can be found here including trogons, babblers and barbets, as well as teeming multitudes of cave swiftlets.

Directly to the east of Niah lies Loagan Bunut National Park, which contains Sarawak’s largest natural freshwater lake. Situated in the floodplain of the Tinjar River, the lake is surrounded by lowland dipterocarp and peat swamp forest. Although the water levels fluctuate throughout the year, many fish-eating birds,s uch as Oriental Darter, Grey-headed Fish Eagle, Lesser Fish Eagle and Osprey, can be found here.

The rugged forested hills that can be seen from Miri city belong to the famous Lambir Hills National Park. Home to one of the world’s highest tree diversities, this beautiful rainforest has been the focus of many ecological studies. Many visitors come to Lambir to swim in the clear waters beneath the picturesque waterfalls, but the park is also an excellent destination for any birdwatcher willing to tackle the steep trails. Bornean Bristlehead is regularly seen here along with beautiful forest birds such as Garnet Pitta, and several species of babblers, barbets and flycatchers.

Just northeast of Miri city, the Kuala Baram Wetlands covers 600 hectares of marshland at the mouth of the Baram River. A variety of species of water birds can be found here including the Chinese Egret and the critically endangered Chinese Crested Tern. 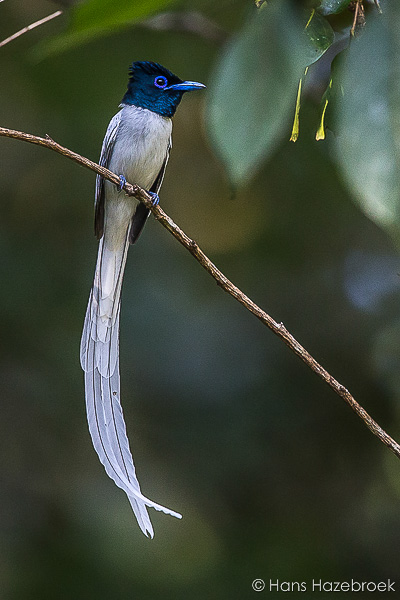 A UNESCO World Heritage Site, Gunung Mulu National Park is Sarawak’s most famous park. Although renowned for its amazing limestone cave systems, Mulu is incredibly biodiverse and hosts a wealth of rare flora and fauna. The entrance to Deer Cave is an almost guaranteed site for the Bat Hawk, especially at dusk when up to 1.8 million Wrinkle-lipped Bats emerge from the cave. Mulu has an eye-catching bird list of 262 species, which includes all eight species of Bornean hornbills, and over half of the island’s endemics such as Fruithunter, Hose’s Broadbill, and Whitehead’s Spiderhunter. Montane specialties can only be seen via a multi-day trek to the upper slopes of Mount Mulu.

Pulong Tau National Park is Sarawak’s largest reserve, comprising nearly 600 sq. km of pristine montane rainforest. Occupying the western flank of the Kelabit highlands, its spectacular mountain landscapes include Mount Murud, Sarawak’s highest peak (2,424 m), and the Tama Abu range. The main villages, Bario, Ba’ Kelalan, Long Banga and Long Lellang, can be reached by flights from Miri, or alternatively, by four-wheel-drive vehicle. More than 300 species of birds are listed for this park, including the rare endemic Bulwer’s Pheasant and Black Partridge. With a broad altitudinal range and habitat diversity, Pulong Tau National Park is home to numerous other endemic species including Bornean Whistler, Mountain Barbet, and Whitehead’s Broadbill.

Located at the north end of Pulong Tau National Park, the village of Ba’ Kelalan can be reached by a short flight or a full day drive from Lawas. The wooded hills surrounding the settlement are home to many choice submontane birds including Oriental Bay Owls, Ferruginous Partridge, Red-breasted Partridge and the fabled Dulit Frogmouth.

In the far north of Sarawak in the Ulu Trusan region, the mountainous Payeh Maga IBA is one of the state’s most promising new birding destinations. It can be reached by four-wheel-drive vehicle from the town of Lawas, and while day hikes into the forest are possible, visitors wishing to spend more time at the higher elevations should be prepared to camp in the mountain shelters. Well over 30 species of endemic hill and montane birds can be found here, among which include Mountain Serpent Eagle, Bornean Frougnouth, Whitehead’s Trogon, Blue-banded Pitta, Bornean Banded Pitta, Pale-faced Bulbul, Bornean Bulbul, Bare-headed Laughingthrush, Bornean Leafbird, and Whitehead’s Spiderhunter. A Star feature is the highly sought after Black Oriole which was rediscovered here in 2010. 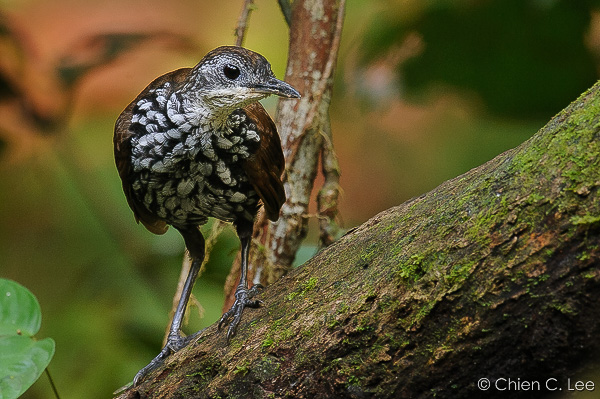 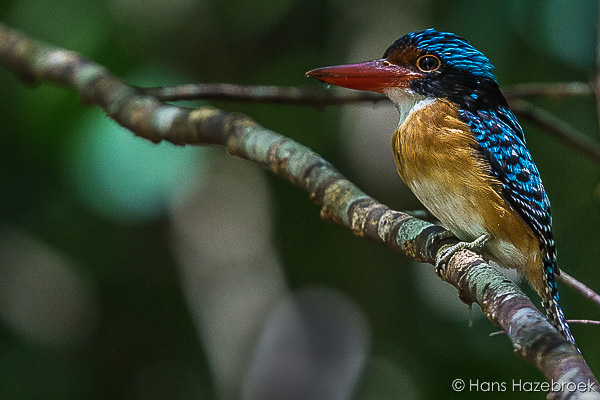 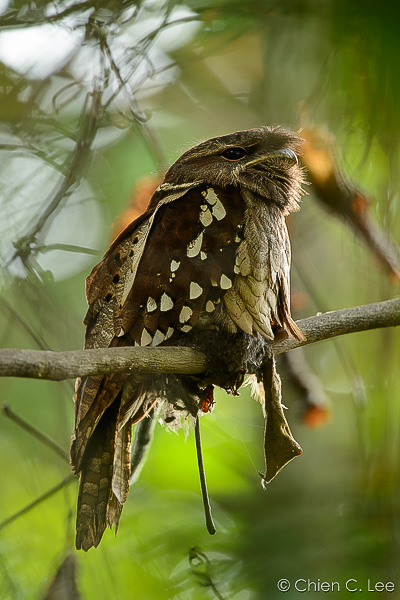 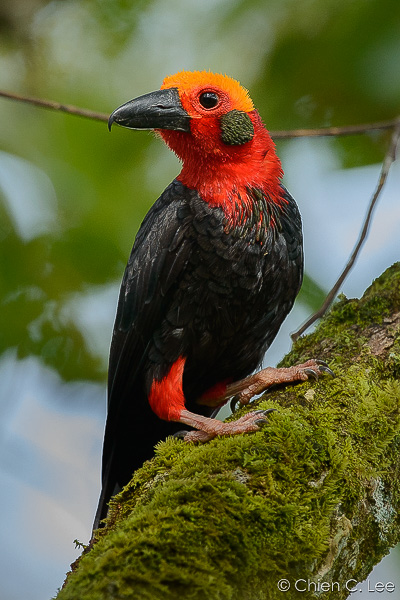 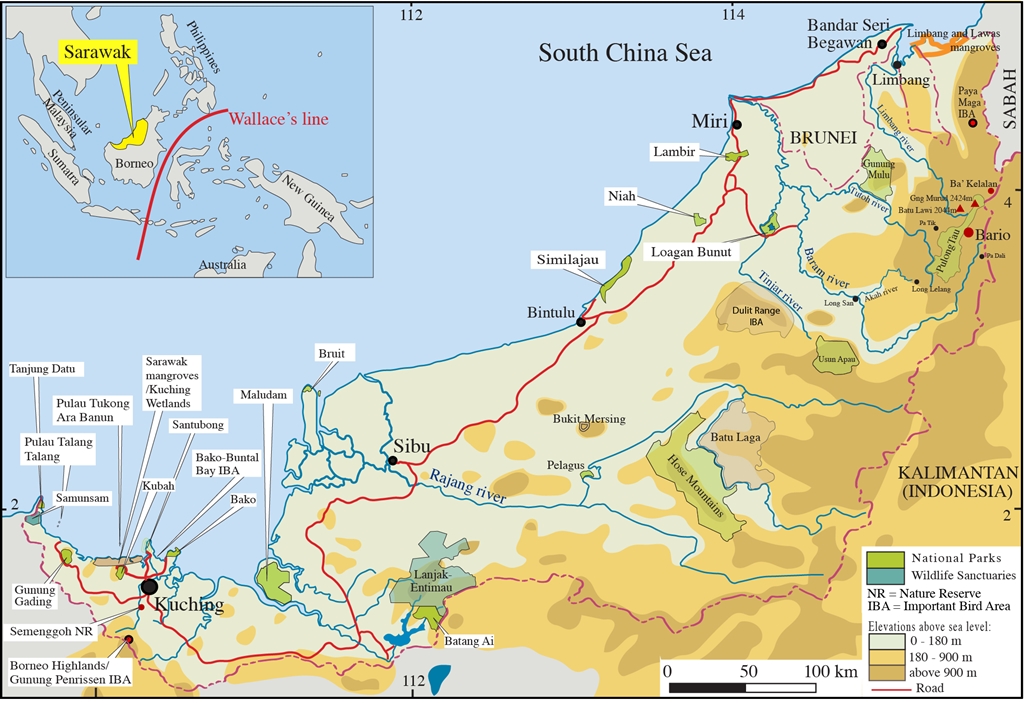 Along its extensive coastline, Sarawak offers excellent wintering grounds for waders and other waterbirds. The globally Vulnerable Chinese Egret  often congregates in significant numbers in the Bako-Buntal Bay with possibly the largest concentration of the species in Borneo. Buntal, a fishing village at less than an hour’s drive from Kuching, gives access to part of this coastal region. Spectacular congregations of large waterbirds such as the Far-eastern and Eurasian Curlews are not unusual in the Bako-Buntal Bay in the wintering months, which approximately correspond to the rainy season in Sarawak. Some 55 species of water birds, including the Pacific Golden Plover (often seen in its beautiful breeding plumage) have been recorded here. 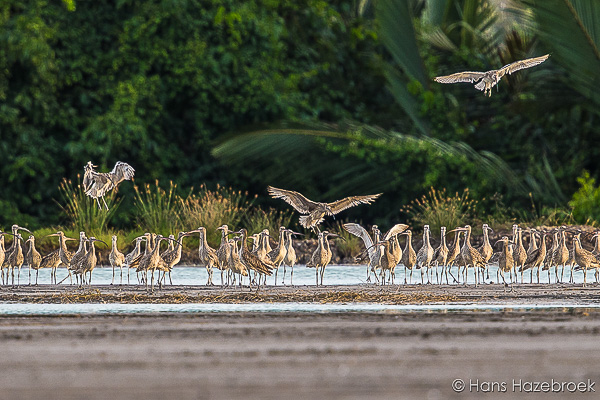 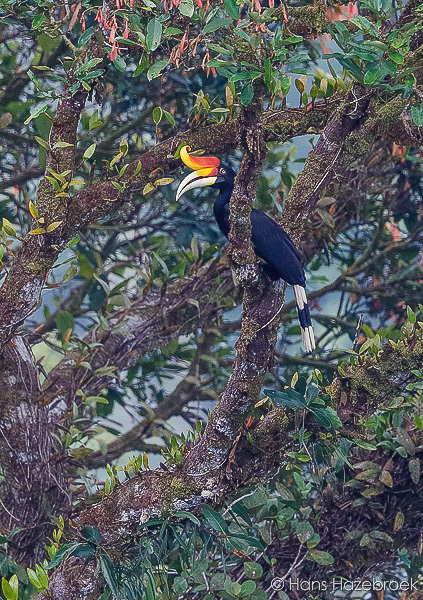 These animals are totally protected in Sarawak. 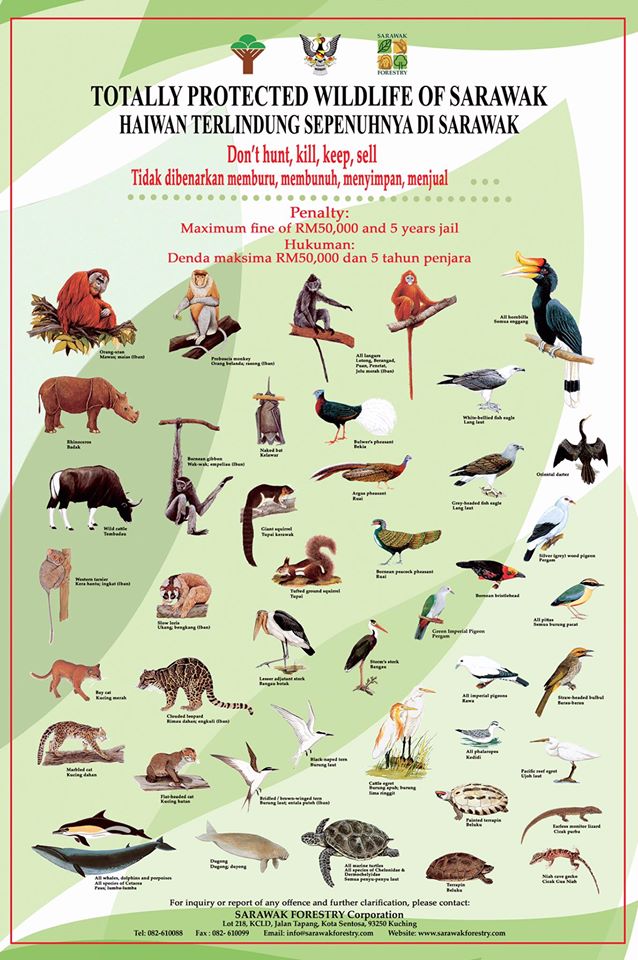