Lambir Hills National Park is probably the world’s most complex and diverse forest ecosystem.  Its 6,952 hectares of lowland dipterocarp and heath forests rise to a height of 450m and produce the greatest known level of plant biodiversity on the planet. This provides a home for 237 different species of birds, flying squirrels, wild pigs, gibbons, many different types of monkey, various species of deer, and untold insects and other invertebrates, as well as dozens of international research scientists who are permanently stationed in the park.  Lambir also offers fascinating trekking trails leading to sparkling waterfalls and bathing pools scattered about the rainforest, all within 40 minutes drive of downtown Miri.

Most of Lambir’s trails are interconnected, so it is easy to do quite a few in a day.  The Latak Waterfall Trail is the shortest, easiest and most popular – if you are looking for peace and solitude, come on a weekday. The trail (red/white markings, 20 min) follows the course of a clear, fast-flowing stream past two very pretty small waterfalls to a large forest pool surrounded on three sides by steep rock walls and fed by the 25-metre Latak waterfall.  Changing rooms, toilets and picnic areas are provided and the pool is safe for swimming, but non-swimmers and small children should take care, as it is deep in parts.

The Pantu, Bukit Pantu and Pantu Waterfall Trails are all branches of the same trail system.  Shortly before the Latak Waterfall, the Pantu Trail (white markings, 1 hr.) branches off to the left up a series of steep steps past an abandoned tree tower, then downwards through dense forest to the Nibong waterfall, an idea place to cool off. A few hundred metres further along are the Bukit Pantu Trail on the right (yellow/white markings, 1½ hrs) offering superb views, and the Pantu Waterfall Trail on the left (red/yellow markings, 1 hr.).  Beyond the Pantu Waterfall Trail the terrain gradually rises, passing through rugged, dense forest filled with the sounds of Lambir’s wildlife.  After 4 km, the trail forks, the right fork leads to the summit of Bukit Lambir.

The Summit Trail (red/blue markings, 3 hrs) is hard work for the not-so-fit, but the abundant wild orchids and the superb view from the summit (456m) make it worthwhile, and trekkers can cool off in the pool below the Dinding waterfall on the way down. Lambir Hills National Park also offers a variety of tougher trails for serious trekkers; for further information. Please consult the park wardens. 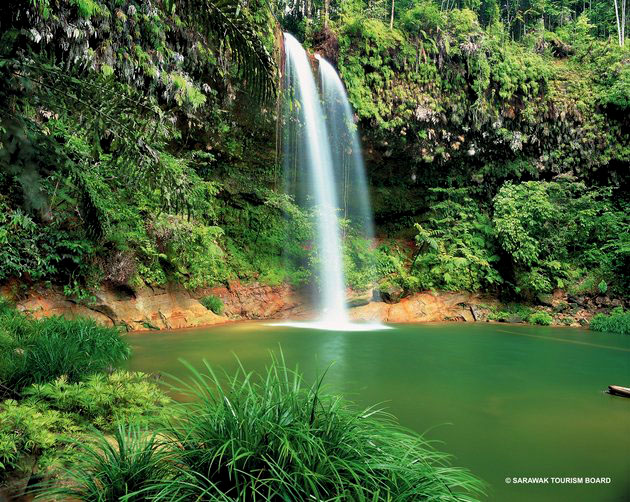 Lambir is only 32 km from Miri. From Miri (Pujut Corner Bus Terminal) take any express bus to Bintulu, Sibu or Kuching, all of which stop directly opposite the park HQ. The journey time is 30-40 minutes. If you take a taxi (approx. RM70 each way), arrange a pick-up time for the return journey.
Self-drive cars are also available – ask at your hotel counter.