Batang Ai National Park is part of the region’s largest trans-national protected area for tropical rainforest conservation. Home to some Iban longhouses, there are animal tracking and traditional fishing expeditions to be had, where you can follow and learn from the local Iban tribe on their methods and skill.

The itinerary spans three days and two nights of roughing it and catching your own meal, and it became a trip to remember for the group sent by Sarawak Tourism Board.

The group departed Kuching at 8.00AM, and arrived in Serian Town by 8.45AM, where they got to try out local snacks and food, and explore the local market. This is their chance to buy some ingredients that they can’t do without, seeing as they will be catching and cooking their own food once they reach Batang Ai. 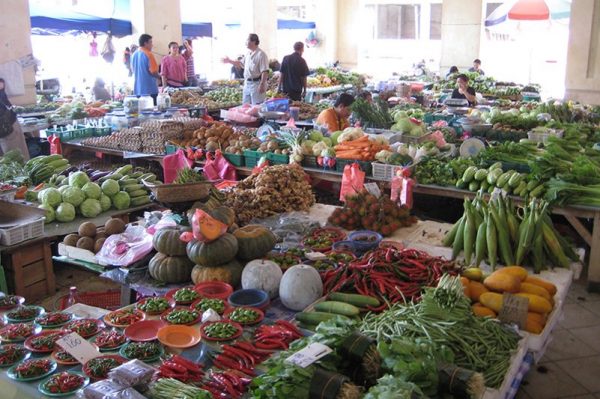 Around 11.30AM, they group stopped for an early lunch at the Pusat Perniagaan Peladang Temudok rest stop at the Sri Aman Junction.

From here, the group moved on and reached Batang Ai Resort Jetty by 2.40PM, and from there they will take a longboat journey upriver. (2 images) 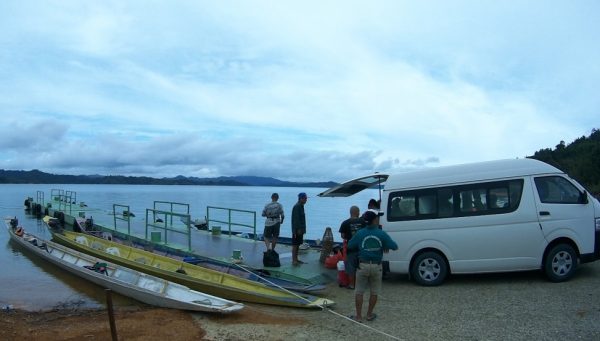 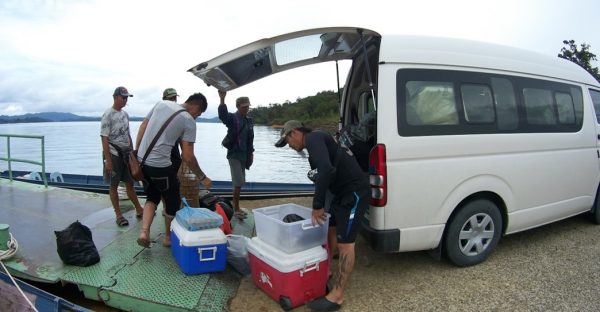 Loading the cargo into the longboats for the trip

By 3.00PM, they depart to Nanga Jengin, Ulu Batang Ai, on an upriver journey. The boatman had to change to the smallest propeller available because the river was now far shallower as they got further upstream. 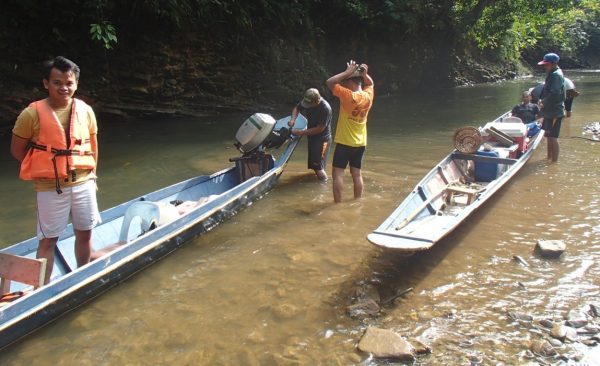 The river gets shallow 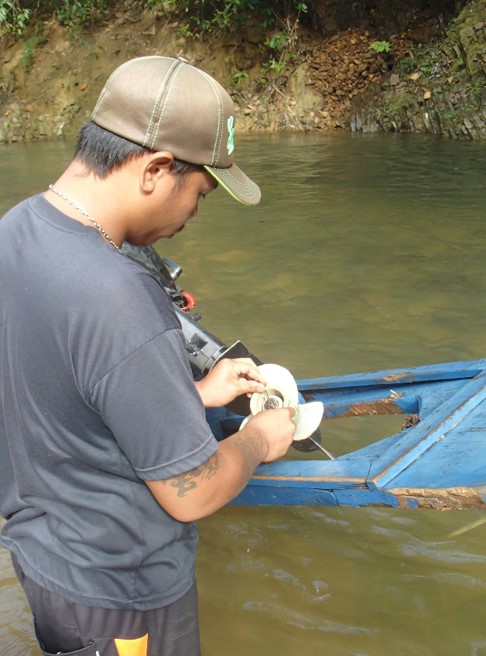 By 5.30PM the group reached the Nanga Jengin longhouse. The village guides stopped by their longhouse to pick up the camping and fishing equipment. It was a nice reprieve in the boatride and rather exciting as everyone anticipated and discussed the camping trip to come! And it is wonderful to see a traditional style Iban Longhouse. 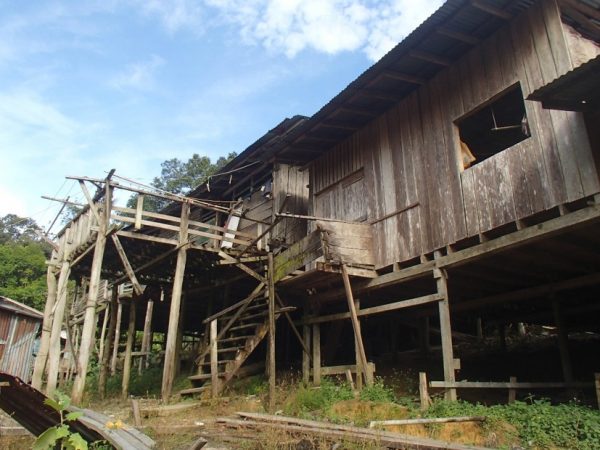 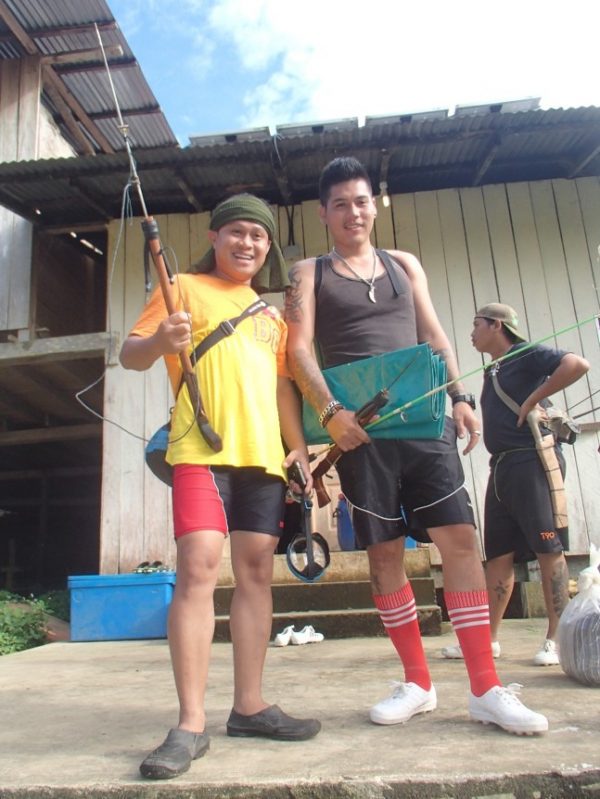 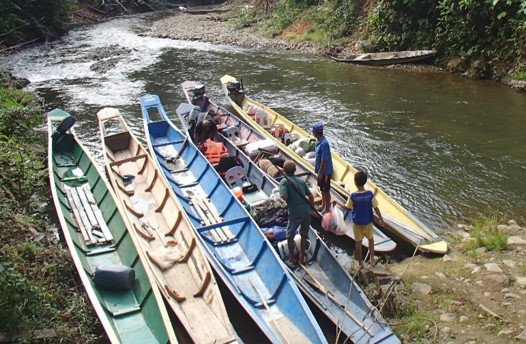 The longboats on the banks of Nanga Jengin

The expedition continued within 15 minutes, and they continue upriver to Nanga Chapan. The water level was shallow in some areas, and they had to push the longboat and walk along the riverbank. This is a common practice and has been since the days of the headhunters. 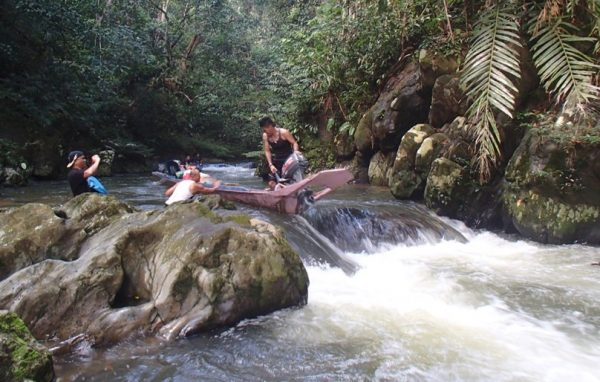 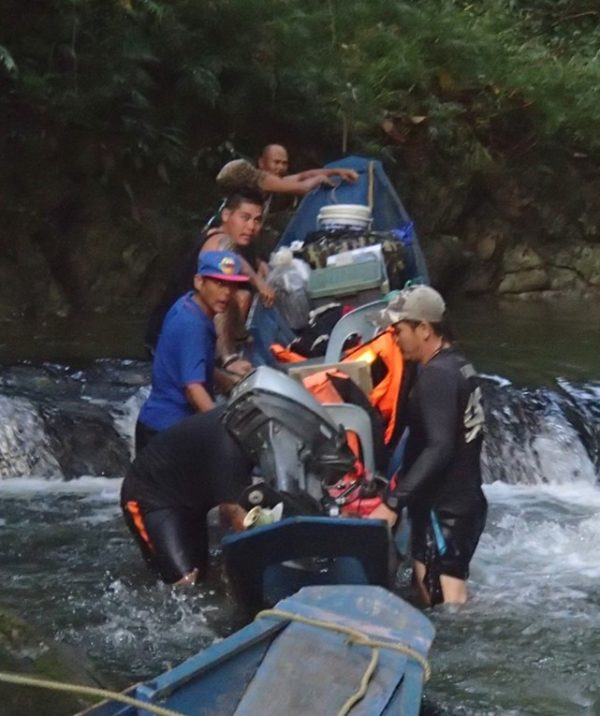 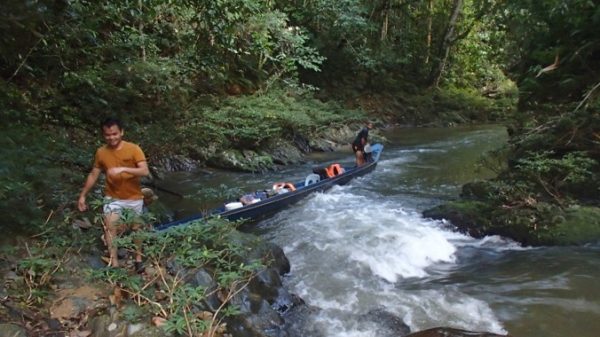 Dragging the boats upriver or walking along to relieve the load for the boatman to steer it upstream.

By 6.30pm they reached the camping grounds at Nanga Chapan, in Ulu Jegin. The boat-ride and walk took nearly one hour thanks to the shallow river, but the guides assured the group that this was a relatively good outcome. During the dry season, the river can be shallow enough to make the boat-ride more like a boat-walk that lasts 2 hours, due to having to pull the boats the entire way upstream. 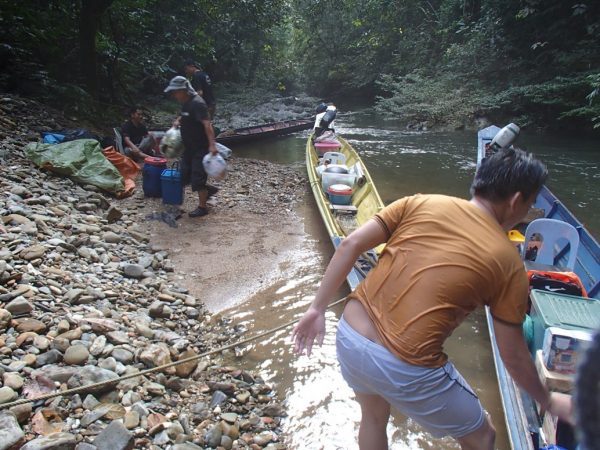 Arriving at the camp site 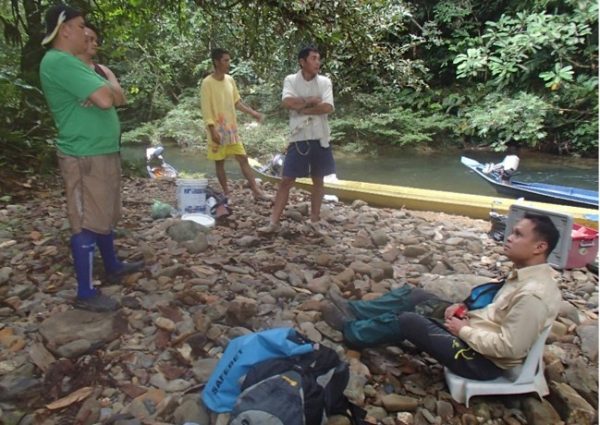 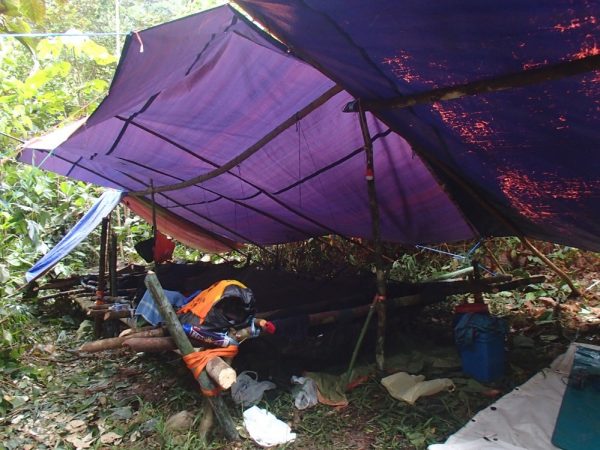 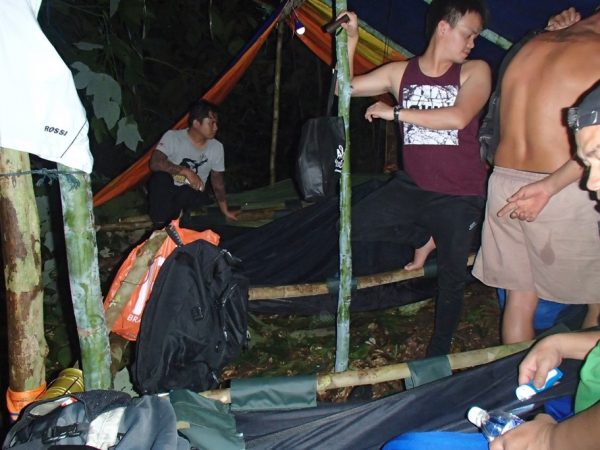 Finishing the camp set up

While the camp was being set up, a hearty jungle dinner was prepared. One the menu? Vegetables, fish and frogs! 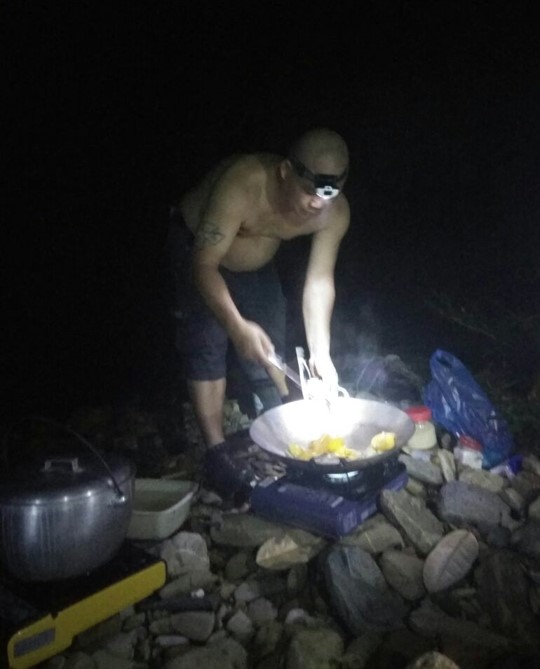 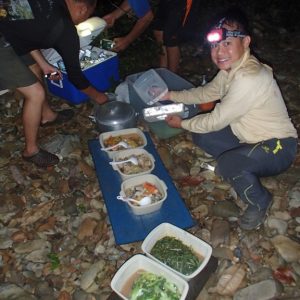 Once dinner is cleaned up, its time for bed. Everyone is out like a light! Sleep, hope the bedbugs don’t bite. (Unlikely, considering the mosquito net everyone was provided with) 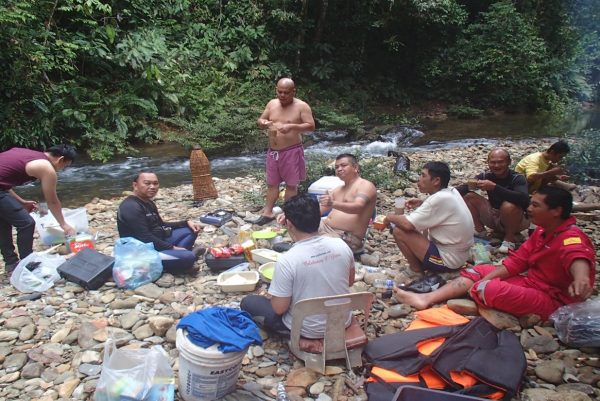 Bright and early with a jungle breakfast.

The fishing adventure begins! The group got to learn how to ‘menjala’ or to fish using a net, as well as the perfect places to set up the ‘bubu’, a traditional bamboo trap that works by tempting fish into it using bait, which the fish can easily swim into but cannot swim out of.

If the group had stayed longer, for four days and three nights alternatively, they could have caught even more fish in different ways. As it were, the catch they got was pretty impressive regardless.

They got to prepare their catches over the open fire using whatever ingredients they brought along or found in the jungle. A catch well-earned must taste all the better!

After a satisfying lunch, they went off to learn animal tracking from the Iban guides. They found wild boar tracks, an area where some Argus Pheasants had performed a mating dance, a porcupine feeding trail and even an Orangutan nest high in the trees! Not all tracks are on the ground, after all. 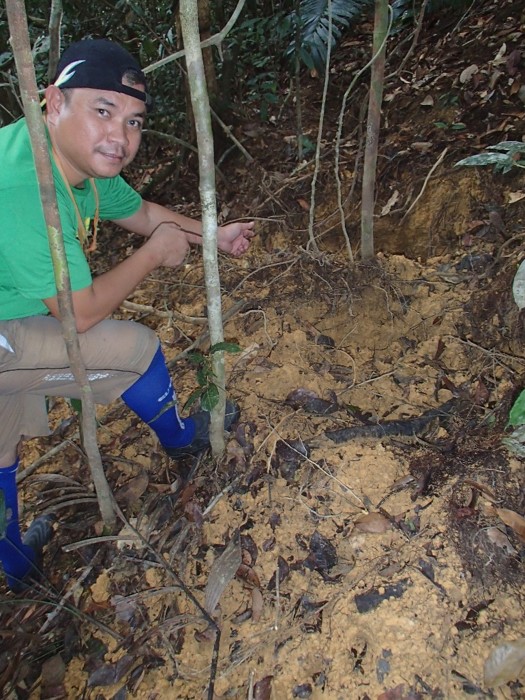 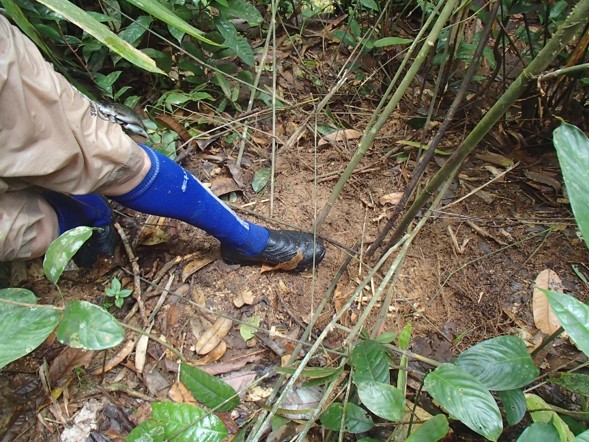 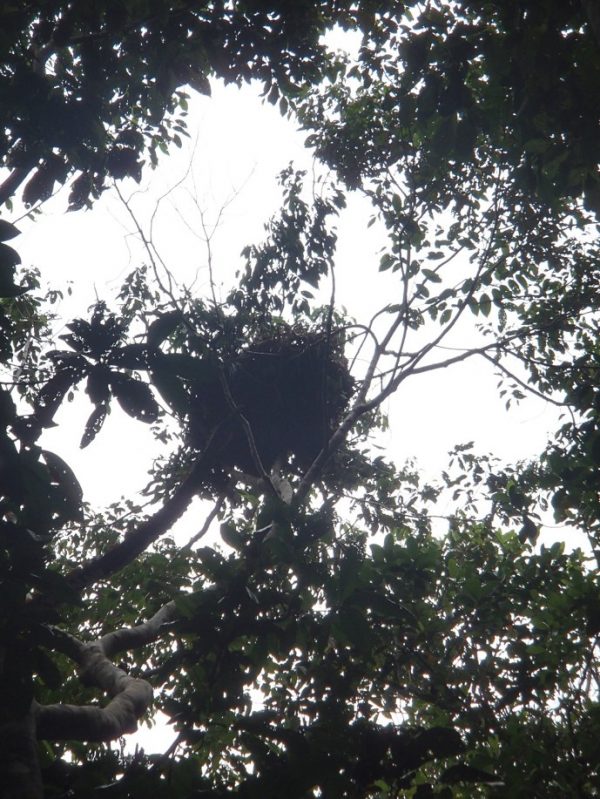 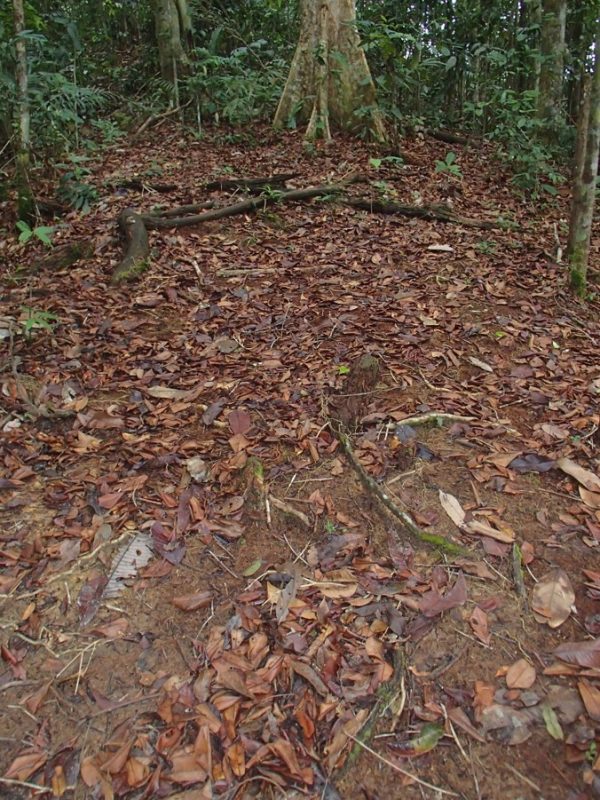 Since there is no Argust Pheasant to be found, one of the expedition participants was kind enough to demonstrate the mating dance. I suppose sometimes, this is as close as you can get to the real thing.

The group learned some valuable survival lessons from the guides, such as how to set traps for small animals….

…and how to peel off the bark from the Penduk tree and create rope. 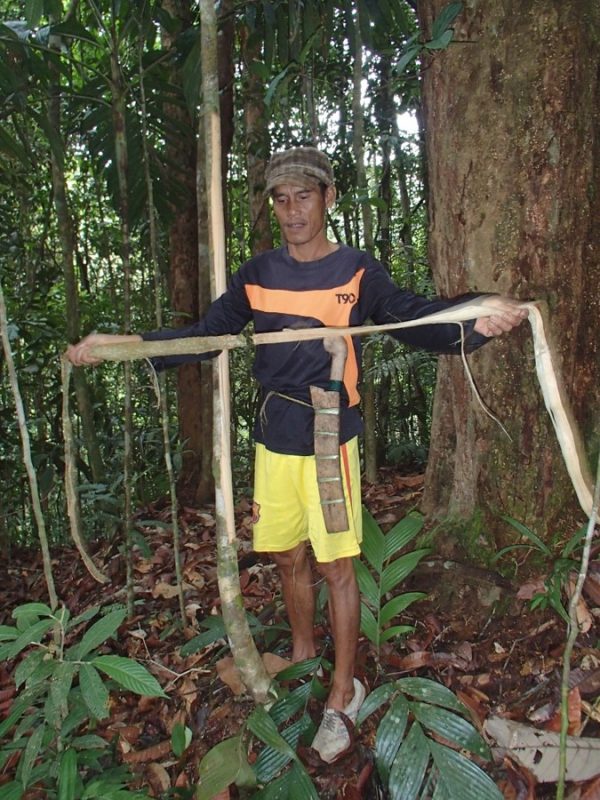 They also taught the group how to recognize the Daun Perangcang or “Family Planning Plant”.  Though its safe to say when in doubt, a pharmacy is likely still a better option in this case. 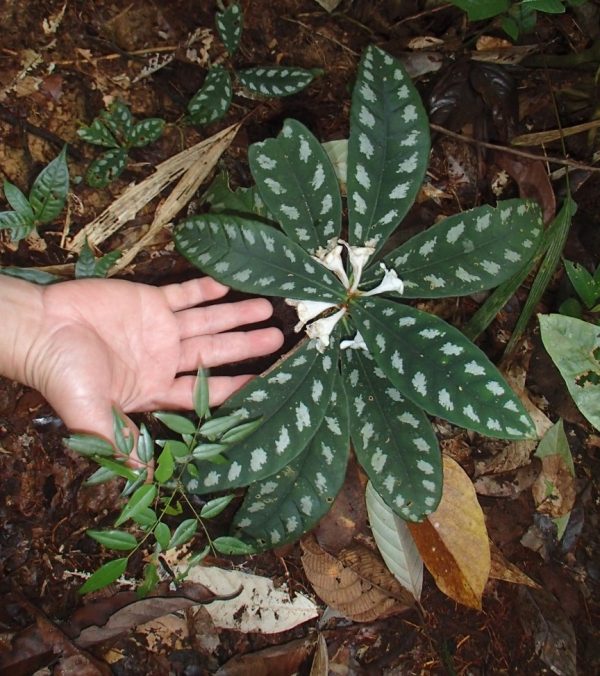 After a long day in the jungle the group packs up the camp by 5.45PM and prepares to move downriver back to Nang Jengin where they will be staying at a Jungle Lodge for the second night. The trip was much easier on the way down than on the way up, as often is the case. While the river was too shallow for engines, it was deep enough that the current and bamboo poles brought them down with ease. 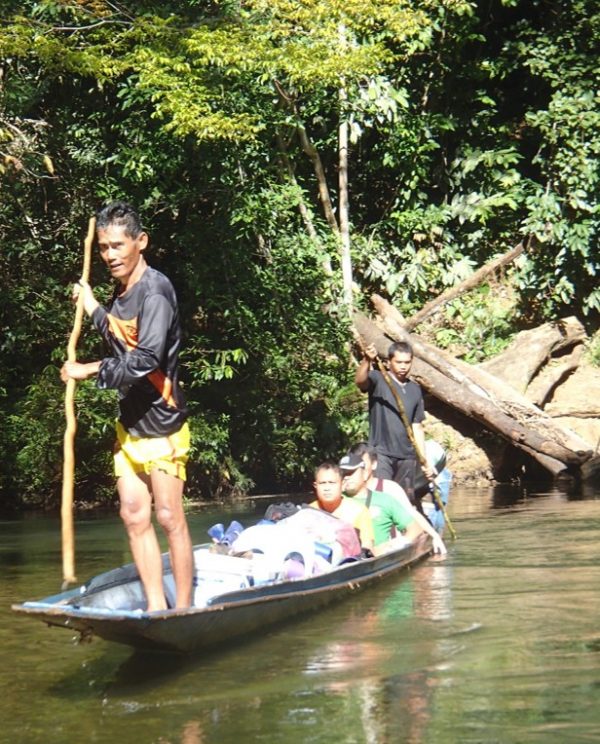 On the way down, the group by chance ran into a group of Iban men that had been tracking a wild boar. They were successful in shooting it and were bringing it back to their longhouse. 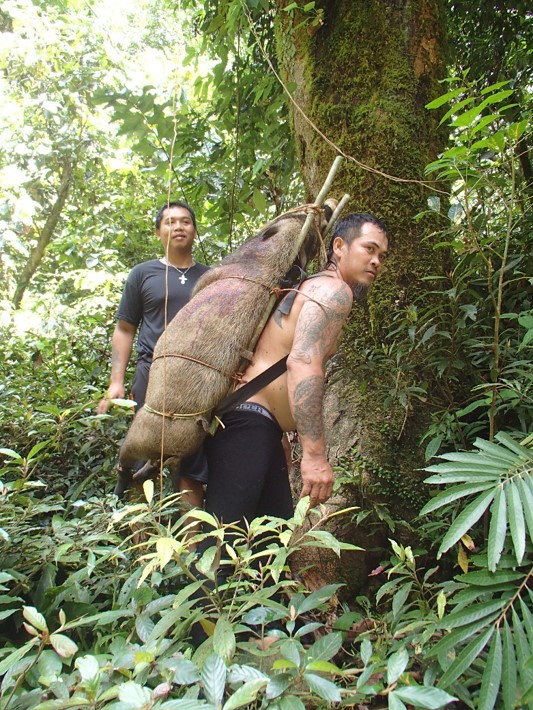 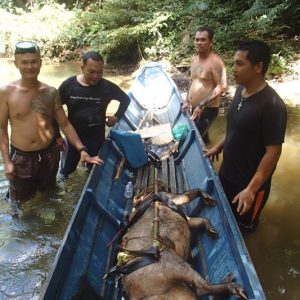 The intrepid hunters and their game

They reached the Jungle Lodge & Nanga Jengin Longhouse by 6.00PM. Here, they stayed the night at the Lodge and enjoyed a nice village dinner.

At 11.45AM the next day, it is time to say goodbye to Batang Ai. The group reached Batang Ai Resort Jetty by 2.30PM

At 3.40PM they  stopped over at the Jetty and Suspension Bridge of “Batang Ai Recreation Park.” 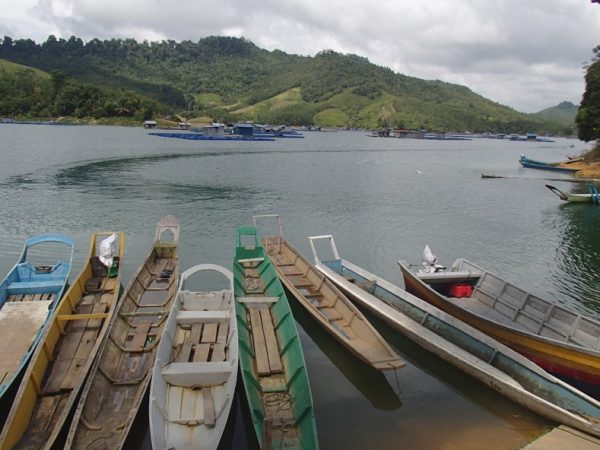 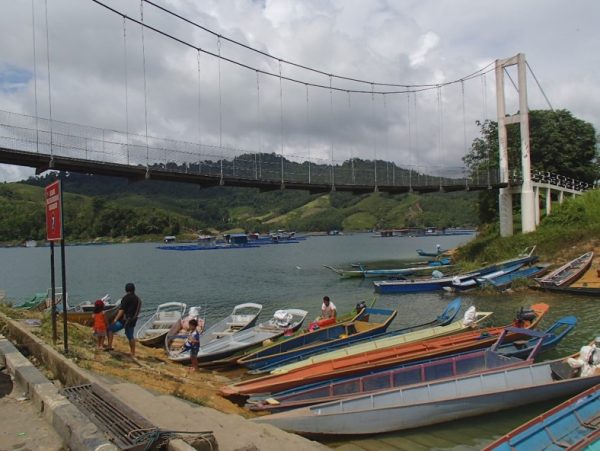 By 4.00PM the group departed from Batang Ai Recreation Park to Lachau for tea, before heading back to Kuching by 8.00PM.