The Melanau Cultural Experience and the Pesta Kaul 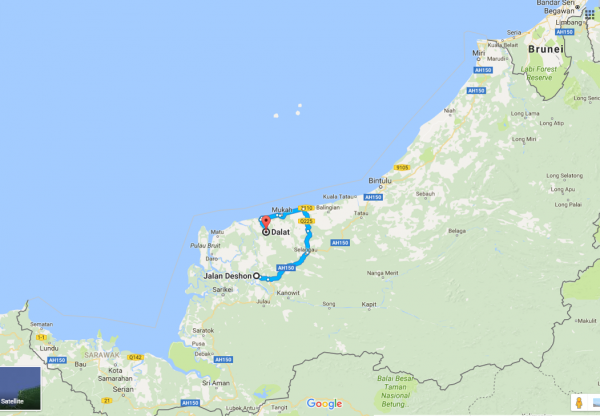 Mukah, a small town located in the central region of Sarawak always rich with its cultural value. Populated by the majority of Melanau people, Mukah now is a well-develop town/district and well known by its famous “Kaul” festival that celebrated every year. The Melanaus’ are one of the most celebrated ethnic tribes in Sarawak, known for their gentle, loving nature and seafaring skills besides making “Sago” and “Umai” as part of cultural practices that expose their popular traditions.

Among Mukah’s popular attractions, the crown jewel remains the “Pesta Kaul Mukah,” a festival full of the cultural heritage of the Melanau people in the region.

This product experience team will be experiencing the Mukah, Dalat and Oya as a tourism attraction while visiting the local yearly event held in Mukah on this 4D2N trip. During those four days, they visited sites such as the Sibu Central Market, Kut River jetty, the Church by the River and Jerunei Gardens, Kampung Judan the home of ‘kuih asli’ (a type of snack), an authentic Melanau Tallhouse Lamin Dana as well as the Pesta Kaul Mukah.

The first day of the expedition brought the team to Sibu for the night, with the journey beginning the next day.

Day 2: Sibu to the Church by the River, home of the Kuih Asli and the Melanau Tallhouse

The team began early in the morning to see the charming Sibu Market. Famous for its diverse organic jungle and farm produce, the fresh catches of the day and their traditionally preserved food. Sibu is a colourful representation of the Sibu community, a peak into their daily lives and dishes.

Next, the team traveled to Sungai Kut by speed boat, before stopping by at the Sungai Kut jetty to see the school and village.

By afternoon, they arrived at the Church by the River and the Jerunei Gardens. The ‘Church by the Rover’ actually seems more like the church ‘on’ the river, with most of its structure supported on stilts over the moving waters of the river. It is a pillar of the community and a place for congregation every sunday and during ceremonies and community events.

The Jerunei Gardens is named so after the towering Jerunei at the centre of it, also known as a Kelidieng.  A plaque decorates the centre of the garden explaining the creation of Jerunei/Kelidiengs. While the English translation is not the best, vital information can still be gleaned from it. For the purpose of clarification, we have transcribed the message below: 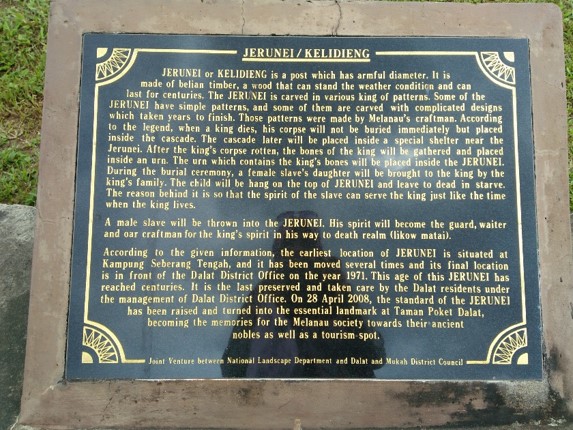 “Jerunei or Kelidieng is a wooden post which measures up to an armful in diameter and is made of Belian timber, a type of wood that can withstand  exposure to extreme weather conditions for centuries. The Jerunei is carved with various kinds of patterns. Some have simple patterns, some of them are carved with complicated designs which takes years to finish. Those patters are made by the Melanau craftsmen. According to the legends, when a king dies, his corpse will not be buried immediately but will be placed inside a *casket. The casket later will be placed inside a special shelter near the Jerunei. After the corpse has rotted, the bones will be gathered and placed inside an urn. The urn containing the King’s bones will then be placed inside the Jerunei.

During the burial ceremony, a female slave’s daughter will be brought to the king’s family. THe child be be strung to the top of the Jerunai and left to starve to death. The reason behind this is so that hte spirit of the slave can serve the king in death, just as they had in life.

A male slave will be thrown into the Jerunei. His spirit will become the guard, waiter and oar craftsman for the King’s spirit on his way to the Death Realm, Likow Matai.

According to the given information, the earliest known location of a Jerunei is at Kampung Seberang Tengah and has been moved several times before settlng in its final location in front of the Dalat District Office in 1971. This Jerunei is estimated to be centuries old and is the last preserved and taken care of by the Dalat residents under the management of the District Office.

On 28 April 2008, the Jerunei was officially recognised for its historical and cultural significance and turned into the essential landmark at Taman Poket Dalat, becoming an eternal reminder for the Melanau Society on the lives of their ancient nobles, as well as a tourism spot.”

By evening, the team departed to Oya and transited to Kampung Judan, the ‘centre’ of ‘Kuih Asli’ making. Here they witnessed the preparation of the traditional ‘kuih’, which are crispy biscuits or snacks, as well as packaging. The famous kuih featured here are the Kuih Sepit (love letters), Tebaloi (dry sago), Kuih Jala, and Keropok Ikan (fish snacks).

The team then arrived at Lamin Dana where they stayed overnight, an authentic replica of a Melanau Tallhouse.

The Tallhouse has cosy rooms, decorated with traditional displays, photos and attire throughout.

Bidding Lamin Dana farewell after a good night’s rest, the team cruised along the Telian River and Misan River towards Mukah. They stopped by Kampung Telian to view the village and see the logs of Sago in the river, the traditional method of transporting the logs through the natural waterways still the main method for these Sago farmers.

They arrived at the Mukah Waterfront and Market. The Waterfront is a great place to take leisurely walks, appreciate the sights and enjoy the sun and serenity. The Mukah Market sells dry and wet foods, with their signature being chopped fresh fish made especially for umai, a traditional delicacy made from raw fish which is cooked with the juice of limes, with other additional ingredients added for flavour.

Finally, the group headed to the main event: the Pesta Kaul.

It began as a  religious ceremony to appease the spirits of the sea, land, forest and farm. It is a ritual of purification and thanksgiving as well as one of the propitiation for good fortune. Today, the festival remains an annual event where the Melanau people of Mukah (though now no longer religiously practicing) keep their culture alive, gather together as one community and celebrate their traditions.

The Pesta takes place at Paintai Kala Dana and begins with the “Kaul Serahang Kakan Mukah,” an offering of traditional food in a special offering basket (the serahang) symbolysing the commencement of the ceremony.

The rest of the festival is full of fun and games, both traditional and modern, competitions and contests, food, decorations and traditional dance performances.

After the Pesta came to an end, the team headed back to town. Their journey through Melanau-land undoubtedly left them with fond memories, with the fun boat rides and breathtaking scenery that accompanied it, as well as the fascinating insights into Melanau traditions, from their architecture to their ancient funeral rights, to their Pesta Kaul where they continue to preserve their traditional games, food, dances, crafts and ceremonies.

Mukah, and Pesta Kaul, remain a great destination for visitors looking for a pure cultural experience among the Melanau people.