“Sarawak’s unique culture and music truly shone during WOMEX, supporting the fact that there is no better destination for an event celebrating the uniqueness of world music from many different lands than Sarawak and the Rainforest World Music Festival,” said Angelina.

Also attending the Expo local musician and artist Alena Murang and musician Eldrick Udos or ‘Bob’ from the band At Adau, both of whom have performed at the RWMF and are impassioned supporters of maintaining and passing on the Bornean cultural heritage.

They participated in WOMEX with the objective of promoting Sarawak’s cultural music as well as their own brand, while networking with the attending key players in the World Music industry.

“This is a big step that has been given to us from At Adau and mainly Sarawak to build the bridge across the world to help achieve our objective of enlightening the world about the beauty and uniqueness of Sarawakian music, arts and culture,” Bob expressed after participating in the Expo.

Bob also expressed excitement over his opportunity to discuss strategies and future prospects with some big names in world music such as Derek Andrews, Artistic Director of Mundial Montreal and Indigenous Music, Canada,  Kaushik Dutta, CEO/Artistic Director of Song of Soul Festival in Kolkata, India and Mr Alejandro Orellana, Programmer and Coordinator of WOMAD The World’s Festival, Chile.

During this Expo, Angelina Bateman alongside Alena and Bob were interviewed by Drago Vovk of Radio Sraka, one of the most popular radio station broadcasting from Novo Mesto, Slovenia.

The 21st edition of the Rainforest World Music Festival will take place next year on July 13 to 15, at the Sarawak Cultural Village. 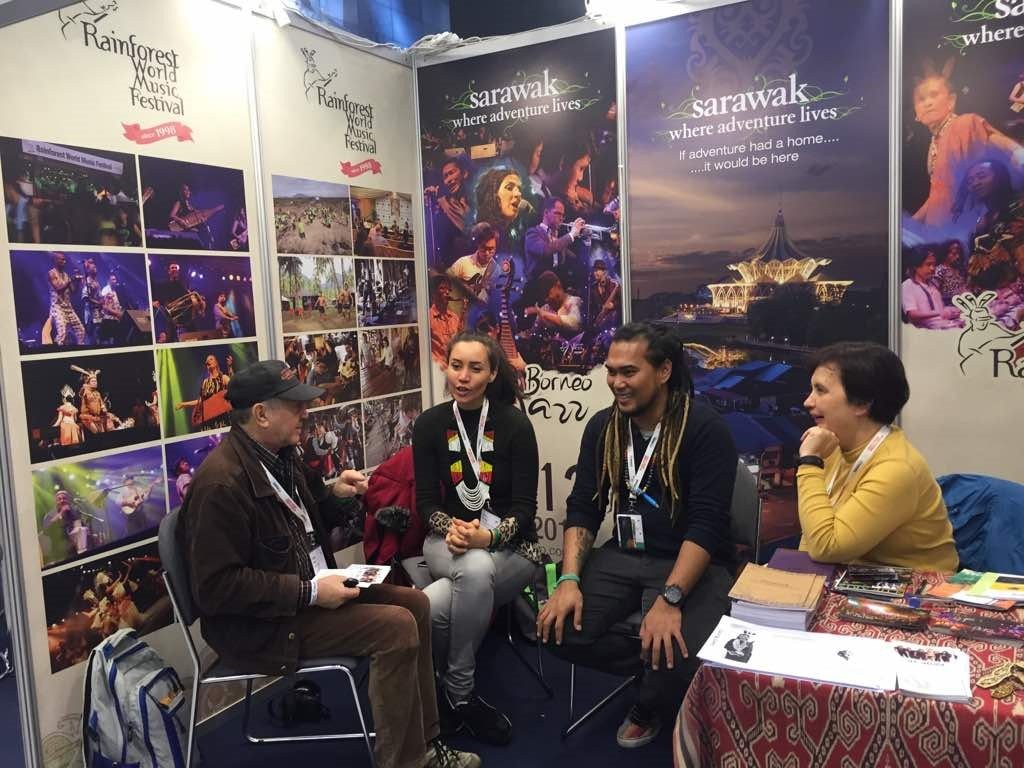 From the right, Angelina Bateman, Bob, Alena Murang and Drago of Radio Sraka during the interview at the booth.