Kuching – August 13th: The Sarawak Tourism Board (‘STB’) has added another milestone in her efforts to boost Sarawak’s tourism through a collaborative effort with AirAsia and Laduni Services Sdn Bhd. to ensure that Sarawak’s brand will be widely seen on selected aircrafts flying in the region. 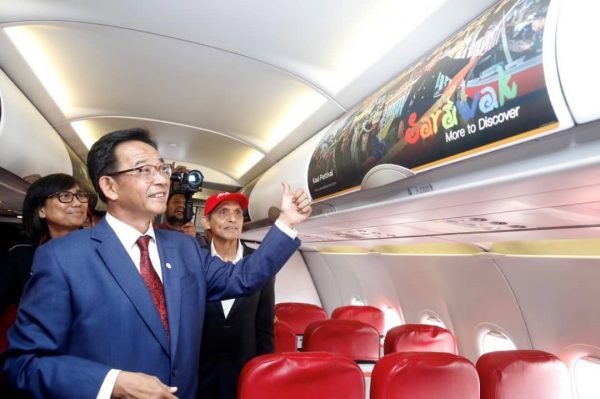 Through this collaboration, the overhead cabin compartments of 5 AirAsia planes will be prominently adorned with visuals depicting Sarawak as a destination full of life, vibrancy and excitement, showcasing various attractions of Sarawak’s culture, adventure, nature, food and festivals.

The collaboration was officiated by the Minister of Tourism, Arts, Culture, Youth and Sports Sarawak, YB Datuk Abdul Karim Rahman Hamzah at a signing ceremony held at the Kuching International Airport today.

This promotional effort on the 5 aircrafts involves AirAsia Malaysia and AirAsia Thailand, reaching out to 6 countries around Asian countries for duration of one year. Some of the key destinations include Kuala Lumpur, Miri, Kota Kinabalu, Langkawi, Johor Bharu, Kuala Terengganu, Alor Setar, Penang and Kuching in Malaysia, Bangkok, Phuket and Chiang Mai in Thailand, Chennai, Kochi and Kolkata in India, Ho Chi Min City, Danang, Hanoi in Vietnam, Medan and Jakarta in Indonesia, Phnom Penh and Siam Rep in Cambodia, Chongqing, Hangzhou, Kunming and Shenzhen in China, Bandar Seri Begawan, Brunei and Singapore.

In addition, Sarawak will also be featured in the coveted 360 inflight magazine and other digital platforms at KLIA2.

YB Datuk Abdul Karim Rahman Hamzah said: “We hope that this promotional initiative will be able to give Sarawak greater brand visibility in the region targeting the correct audience among travellers. It serves to convey not only our promotional messages but a chance to showcase our State’s iconic visuals including the UNESCO World Heritage Site of the Mulu National Park, Sarawak Laksa, Tusan beach, Rainforest World Music Festivals and the Rafflesia flower amongst others.”

Flight connectivity has always been a key structural challenge for the State. It is hoped that promotional efforts such as this will enhance visibility in prime catchment areas within the region.

Echoing the Minister, STB’s CEO Sharzede Datu Salleh Askor said, “Sarawak tourism sees this private-public sector collaboration as a good synergy and consolidated initiative to promote Sarawak to its key target markets. Sarawak has many hidden gems that are waiting to be discovered and aircrafts are certainly one of the best platforms to boost visibility and capture tourists travelling around the Asian countries mentioned.”

Sharzede added that STB is also going strongly on promotions in the digital media realm to capture air travellers who are IT savvy, many of whom tend to use Online Travel Agencies (OTAs), for their travels.

This latest collaboration follows the earlier ‘Visit Sarawak Campaign’ AirAsia aircraft livery, which was launched on February 2, this year. These are among STB’s promotional strategy to create visibility for Sarawak in the domestic and International markets.