5 Outstanding Tribal Dishes In Sarawak & Where To Find Them

With a population of 2.6 million, Sarawak is the 4th most populous state in Malaysia and covers the largest of all the states. To put it into perspective, it is bigger than the whole of Peninsular Malaysia.

Some of the major tribes in Sarawak include the Iban, Melanau, Bidayuh, Penan, Kayan, and Kenyah. These tribes and others, make up around 40 sub-ethnic groups, which means it is the most diverse state in a very multi-racial country.

However, when Sarawakian food is discussed, Sarawak Laksa and Kolo Mee immediately come to mind. These dishes have become such an integral part of Sarawakian identity that they are almost inseparable. 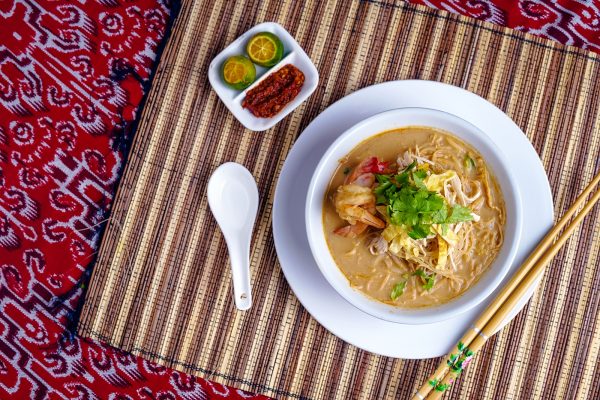 Look at that delicious Sarawak Laksa smiling back at you.

On the other hand, less familiar yet truly authentic Sarawak cuisine that often slips under the ‘culinary radar’ is the traditional food of these many indigenous tribes of Sarawak. Yet these diverse tribes from varied beginnings have influenced Sarawak’s cuisine and helped shape what it has become today.

Cohabitating with this land for centuries, the cuisines of these tribes have evolved over many years as they roamed the lush Borneo rainforests while experimenting with many new and unusual ingredients and pairings.

Although these dishes have evolved, some of them are staples of the indigenous households, passed down through generations and now part of the cultural fabric of each community. As a result, they contribute to the preservation of tribal heritage and provide an authentic Sarawakian experience to those visiting the state.

So when you visit Sarawak, make sure you ask for these tribal dishes! 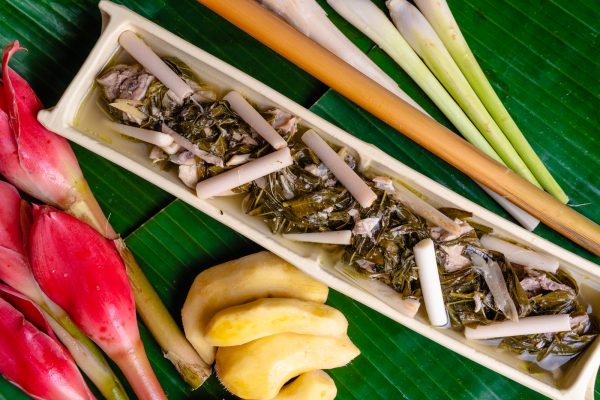 Although traditionally free-range chicken would be used for this dish, using normal chicken has become common. The chicken is marinated in a sauce made of ginger, lemongrass, garlic, salt, and torch ginger flower for about 30 minutes before being put into the bamboo. The bamboo is then placed over the wood fire with its opening covered with tapioca leaves.

The chicken is steam-cooked slowly, allowing it to absorb all the flavours while remaining tender and juicy with a rich, pleasant aroma. 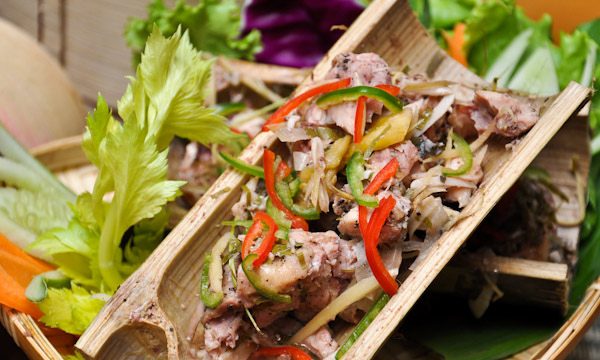 Ayam Pansuh or Manuk Pansuh (chicken cooked in bamboo) is a traditional delicacy of the Dayaks. The Dayak community consists of the Iban, Bidayuh and Orang Ulu (people of the river). This dish used to only be served during festivals, but today it is a common year-round option in many restaurants in the state.

If you’re in Kuching and want to try some authentic Manuk Pansuh, Lepau restaurant is worth a visit. The restaurant serves authentic Dayak and Orang Ulu food and is even designed to resemble a farm hut, creating a kampung (village) ambience, in the heart of Kuching city. 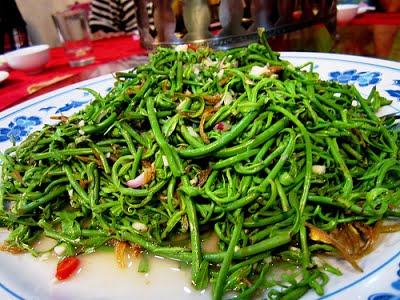 Midin is a wild fern found only in Sarawak. It is one of the most commonly consumed vegetables there and it is paired with almost all traditional delicacies such as Manuk pansuh, Ka Chang Ma, etc. Many call it the official vegetable of Sarawak!

One of the cool things about this vegetable is that nobody actually cultivates or plants it. Midin grows freely in forests, rubber estates, oil palm plantations and on river banks. You can even find it growing up the trunks of trees while you’ll often see women stopping their car and picking it from the side of the road. 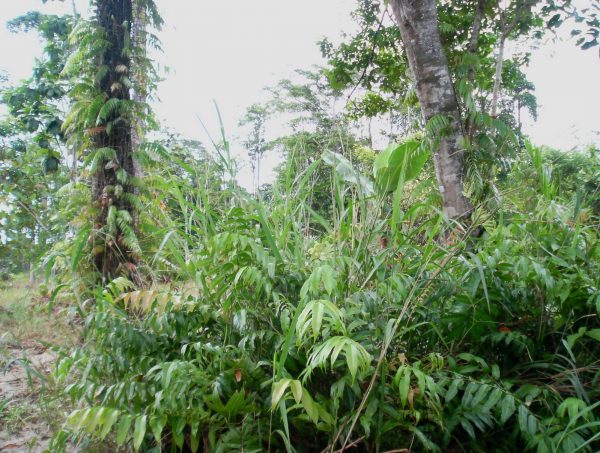 An image of the Midin in the jungles of Bintulu. Source: Myeco-farm

Although there are many ways to cook Midin, it is best stir-fried with belacan or shrimp paste or garlic. This retains the natural crunchy, juicy texture of the vegetable and adds a tangy and spicy twist to it. With ingredients such as lily flower and calamansi as its basic elements, the midin salad epitomises organic food at its core.

Since Midin is a household vegetable, it can be found at any restaurant that has a mixed rice menu. One such place is the Rumah Asap at Tabuan Dayak, Batu Kawah, Kota Samarahan. Since this place has multiple stalls, you can order several Dayak dishes to go with rice. However, a note of warning, because it grows organically and is not farmed, stocks of Midin can be inconsistent or limited so get there early! 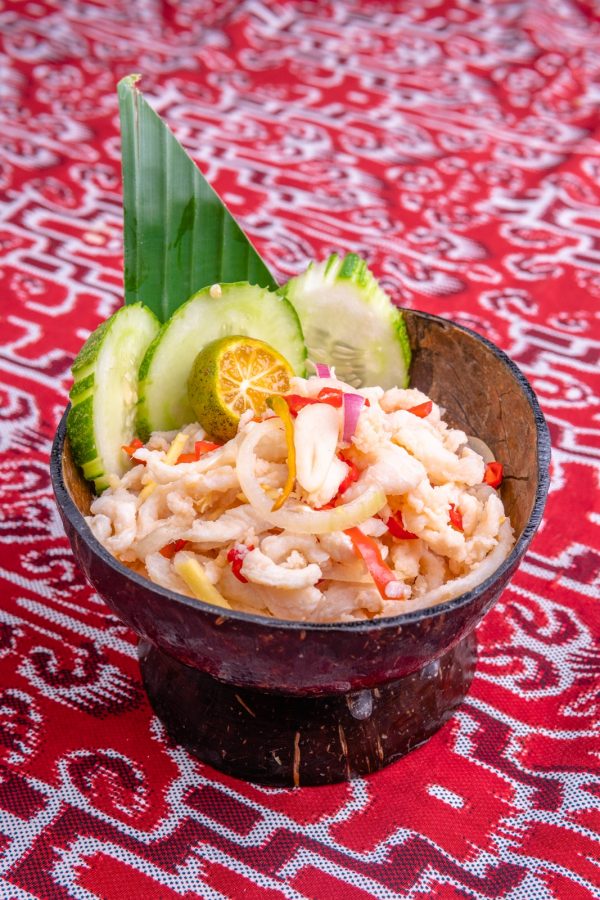 Umai is the Sarawakian version of the Mexican Ceviche that uses calamansi lime instead of lime juice, and slivers of fish instead of shrimp.

Umai is a traditional dish of the Melanau tribe. The term ‘Melanau’ is a name that is only recently being used. Prior to this, the Melanaus called themselves A-Likou which means people of the river. This is because the Melanau tribe would settle along the main tributaries of the Rajang River in Central Sarawak.

Naturally, seafood is an essential part of their diet which is why Umai is a traditional delicacy of the Melanau people. 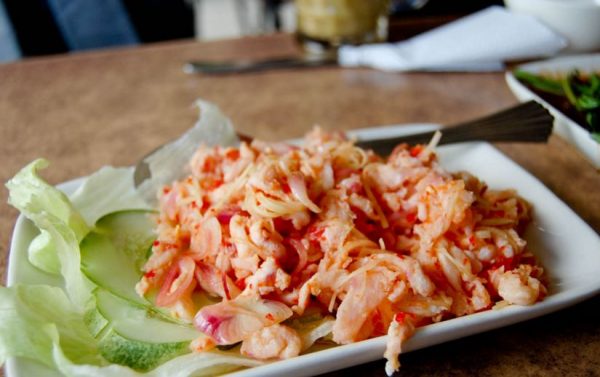 Umai, the raw fish salad, is made with thin slivers of fish, thinly sliced onions, chillies, salt and juice from calamansi lime or assam fruit. It is usually served with roasted sago pearls, which are rolled into balls and cooked – instead of rice. The dish is sometimes prepared with cooked prawns.

For a real taste of umai, head to the famous Top Spot Food Court behind the Pullman hotel in Kuching and look for Makanan Tradisional Sarawak which only sells Umai. 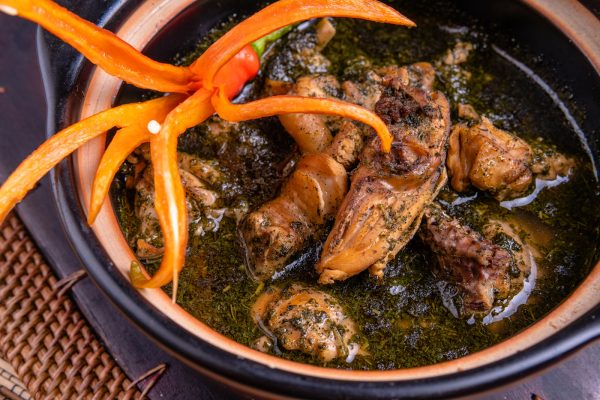 Ka Chang Ma is a Chinese dish integrated into traditional Sarawakian cuisine along with the migration of Chinese communities to Sarawak during the Brooke era. The employment opportunities at coal and gold mines as well as the newly discovered oil fields around Miri and Bintulu in the north, drove this migration.

The ‘Ma’ in Ka Chang Ma refers to the Motherwort herb that is the main ingredient. The chicken is steam cooked in a motherwort herb-based broth and served with rice. 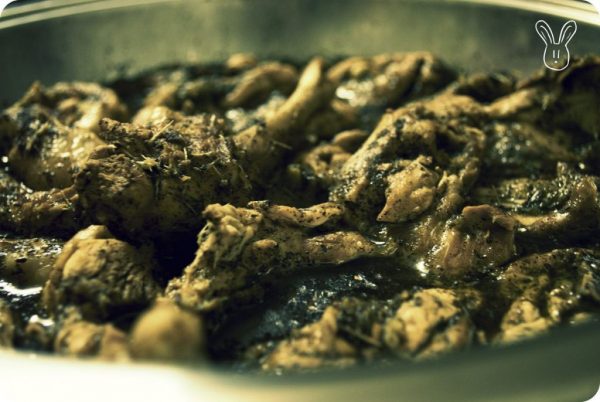 Manok Ka Chang Ma is usually served to women in confinement as it is believed to strengthen the body and quicken the postpartum recovery process. It is also believed to relieve menstrual cramps. Some may even add Tuak (Sarawakian rice wine) during cooking for a more delicate taste.

For some delicious ka chang ma, we recommend Mummy Patz Dayak Cafe in Kuching. This place is known for their delicious Dayak dishes and it is always packed with locals during lunch hour, a sure sign of authenticity! 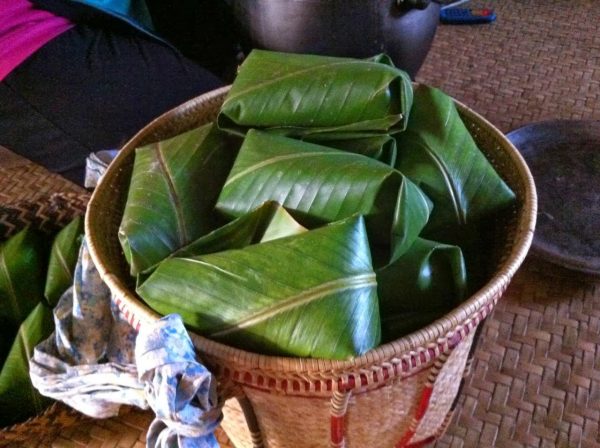 Nuba Laya is a traditional Kelabit dish consisting of mashed rice wrapped in leaves. The leaves used are called Daun Long in Iban, daun isip or itip in Kelabit.

The Kelabits are the indigenous Dayaks of the Bario highlands. They are relatively untouched by modern western influence because of how remote their homeland is. With approximately 6,600 people in the community, the Kelabit are the smallest ethnic group in Sarawak. 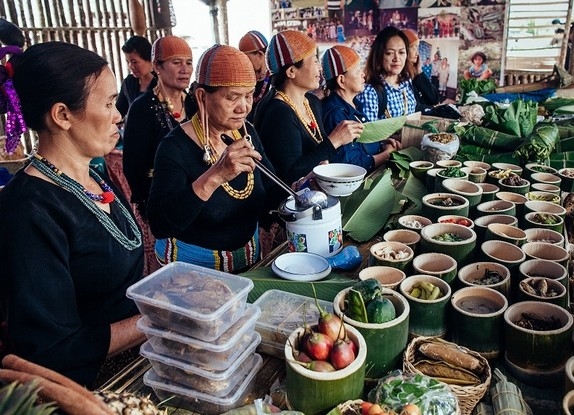 To make Nuba Laya, hot rice is stirred until it has a soft, mashed-like consistency and then wrapped in leaves. This way, the rice can be kept for about 4 days without refrigeration. The wrapping is a difficult task because the rice is VERY hot on the hands, and the movement of folding the leaves needs to be fast and precise. Since women traditionally do the cooking, being able to do it marks the trait of a fine Kelabit girl.

One of the best places in Kuching serving Nuba Laya, along with other authentic Kelabit dishes is Tribal Stove. There aren’t many restaurants serving Kelabit cuisine so be sure to check them out for a real Kelabit culinary experience without having to go all the way to the Bario Highlands. However, if you are visiting Miri, be sure to go to Summit Cafe, the most popular eatery when it comes to Orang Ulu food.

If you would like to get more information on eateries around Kuching, here’s an elaborate brochure on the restaurants and dishes that are must-haves around the city.

While Sarawak Laksa and Kolo Mee are gifts from the heavens, there is a lot MORE to Sarawakian food. A way to experience Sarawak is to immerse yourself in her abundant flavours, taking you on a culinary journey through time while opening your mind to her rich heritage and regional influences.