There was once a traditional healer whose wife fell ill. In a dream, the healer was told to carve out a piece of tree and string it with pineapple fibres. He was instructed to use this newly crafted musical instrument to play tunes for his wife to aid her healing. He did exactly that once he awoke and miraculously his wife got well. This is the story of the birth of Sape (Bornean boat lute), one of Sarawak’s best known traditional musical instruments.

The Sape is made and played by the people of Central Borneo. It is usually carved from one solid block of wood. Its body is hollowed out, the neck shaped and sometimes carved for added beauty. Colours and intricate paint designs can be added to make the instrument distinctive.  Everything, from the look to the sound of the sape, is quintessentially Sarawak.

Sarawak is a mystical place. Malaysia’s largest state is home to 27 different ethnic tribes, each with their own culture and history. They also boast their own unique music, instruments and stories. From the hypnotic drumming of the beduk (long drum) which is likened to the beating of the heart of the rainforest, to the selingut (nose flute), the jatong utang (wooden xylophone) and the sape, Sarawak’s traditional musical instruments and the music they produce tell the story of the people and the land.

Every song is pieced together by the histories of the indigenous communities. The creation and composition of traditional Sarawakian music comes from personal stories, folklore and legends distinct to the respective people. It is a creative expression of their way of life and culture.

Sarawak’s Rainforest World Music Festival brings together all of these elements and combines them into a three-day celebration of music, art and culture. The annual event features a wide range of performances from traditional music to world fusion and contemporary music. The main draw however is the traditional cultural music performed by the local communities of Sarawak. Traditional acoustic instruments are used although modern accompaniment is common.

The 2021 edition of the Rainforest World Music Festival hit another milestone with the introduction of a virtual show. Those interested in the three-day virtual experience can do so by dropping by our YouTube channel https://www.youtube.com/user/sarawaktourismbcm.

Those interested to partake in the 2022 edition of the Rainforest World Music Festival can mark their calendars with the tentative schedule for the festival to be held from July 17th to 19th, 2022. More information can be found at https://rwmf.net/ 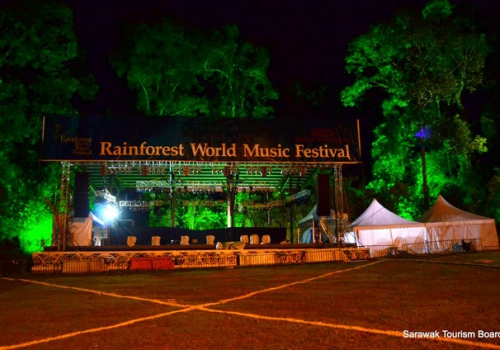 Three new elements have been added to inject freshness into the festival. The Malay House will be used for the…