Tropical rainforests make up two-thirds of the land area in Sarawak. This means that Malaysia’s largest state is filled with a plethora of amazing flora and fauna. Those interested in experiencing the beautiful wildlife that Sarawak has to offer can do so by making a quick stop to the Kubah National Park, located approximately 40 minutes from Kuching.

The Kubah National Park is filled with amazing plants and animals but today we will take a look at the tiny surprises the park has to offer. The tropical climate and humid conditions of the nature park is a paradise for frogs. Local authorities state that there are more than 60 species of Bornean frogs who call the Kubah National Park home.

A popular attraction is a frog pond located at the foot of a mountain. Visitors can take photos and observe the frogs up close in their natural habitat. Frogs are nocturnal animals so they become more active at night. Visit the park once the sun sets to listen to the “symphony” of frog calls.

The star of Kubah National Park is the Wallace’s Flying Frog. As it names implies, this amphibian will not hesitate to take to the sky at the first sign of danger. The Wallace’s Flying Frog is bright green in colour with the fringe of skin between their toes coloured black. This is why they are also known as the Black Toes Tree Frog.

The Wallace’s Flying Frog lives on trees and will descend to the ground to mate and lay eggs. When faced with danger, they will jump away and use their webbed feet to glide away. They can glide for distances of up to 15 metres at a time.

The Matang Narrow-Mouthed frog is the second smallest frog in the world. It predominantly lives in carnivorous pitcher plants. They are hard to spot due to their tiny size with adult males ranging only from 10.6 to 12.8mm long.

The File-Eared Tree Frog features a prominent dark brown triangle on its head, giving it a fierce look. It is yellowish brown with a white belly. Thick and thin dark brown lines run from its head the back, helping it camouflage among the trees.

This frog has a slender body with a blunt but pointed snout. It has smooth skin and features small moles on the back of its hind limbs arranged in rows. The Dark-Eared Tree Frog, as its name implies, prefers to live on trees.

The Malayan Slender Toad is a small toad with slender limbs and a lumpy body that lives in the jungle.

This frog is generally small in size with a cute appearance. It can usually be found in grass or shrubs next to mountain creeks in the tropical and subtropical regions.

Kubah National Park’s Autumn Frog is one out of 86 different species found in tropical Africa, Asia and Australia. It prefers to live in still waters or gentle streams and will often hide in the grass.

The Malayan Horned Frog, also known as the Long-Nosed Horned Frog, uses its body shape and colour to camouflage itself among dead leaves. It prefers to stay hidden among the rotting, wet leaves on the floor of the rainforest, staying invisible to avoid predators.

The Matang Wildlife Centre is a part of the Kubah National Park that operates as a professional wildlife rescue centre. It was set up to rescue the different protected wildlife in Sarawak. It aids injured or abandoned wild animals – many of which are endangered.

Among the animals that you may encounter at the centre are orangutans, sambar deer, crocodiles, sun bears, civets and bear cats, hornbills, eagles, storks and other birds.

The orangutans are commonly known as the “closest relatives to mankind”. They have slender arms measuring up to 2.25 metres in length. The palms and feet closely resemble that of humans and their behaviour have been observed to be somewhat humanlike. 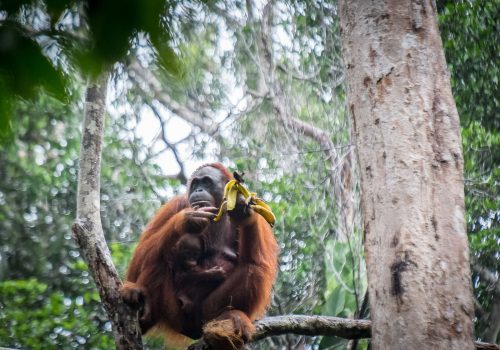