Many of Sarawak’s indigenous communities have called the state home for thousands of years. All these communities contribute to Sarawak’s unique culture and colour.

With so many different communities, it is no surprise then that the state is home to a wide variety of cultural festivals. These festivals ensure the remembrance of their cultures and heritage stays alive amidst the relentless onset of modernisation. While Sarawakians generally welcome everyone to join in their festivities with open arms, there are certain traditional festivals which require an invitation because of its prestige within the particular community.

Here is a list of some of the prominent cultural festivals that Sarawak’s indigenous communities celebrate, two of which are open to anyone, wherever in the world you may come from!

Gawai means ‘festival’ in Iban while the word Dayak is to represent that this is a festival celebrated by the Sea Dayak and Land Dayak, who are respectively known as the Iban and the Bidayuh.

The Gawai Dayak is a festival celebrated by the Iban and Bidayuh to mark the end of the harvesting season. It also celebrates the beginning of the planting season.

The official date of the harvest festival is between 1st and 2nd June. However, different villages may have different dates depending on the decision of their Ketua Adat (Custom Chief). What is consistent is that it is important for those living away from the village to try and come home to help bring in the harvest and celebrate afterwards!

In 1957, Tan Kingsley and Owen Liang, two local radio programmers, first brought up the idea of Gawai Dayak. The British colonial government initially refused to recognise Dayak Day, calling it Sarawak Day instead. It was only in 1962 that Gawai Dayak was officially recognised.

On Gawai eve, the Tuai Rumah conducts miring (blessings and thanksgiving ceremonies). They do this by making offerings to departed ancestors, deities, and spirits. This ritual is to cast away the spirit of bad luck.

Gawai Dayak is a lively festival of traditional music, good food, and games. It does not only preserve the important heritage of the Dayaks, but it also celebrates unity, aspiration and hope for the community.

Of course, Gawai Dayak wouldn’t be complete without (way too) many servings of tuak, a locally-brewed rice wine. Tuak is also an essential part of many other indigenous festivals as well. A stronger alcoholic beverage made by the Iban by distilling tuak over a fire is called “langkau“, or arak tonok by the Bidayuh.

Iban and Bidayuh homes are also open during this festive day to allow visitors a glimpse into their lives. Be sure to come wearing colourful traditional costumes. Don’t be shy to participate in their activities and try their amazing food and tuak!

A prominent festival celebrated by the Melanau is Pesta Kaul. This festival is an annual “cleansing” of uninvited spirits and bad influences. Kaul means ‘coming together’ in the Melanau language.

The Melanau celebrate Pesta Kaul to thank the Ipok (spirits/guardians) for a bountiful harvest. They also pray for the Ipok to protect them and bless them with a better crop the coming year.

This year, the official dates for Pesta Kaul are April 18th and 19th at Taman Kala Dana Mukah in Sarawak however the festival runs for a whole week! If you book now, flights are still good value but will undoubtedly go up nearer the festival!

During Kaul, the Bapa Kaul (Father of the Kaul) officiates the festival by singing mantras. Over the course of the week, people will bring traditional food to the river mouth to share and eat together. Villagers build huge swings, called “tibou”, for them to play with and entertain the spirits. There will be stalls selling different foods and many traditional games.

The highlight of the festival is the ceremonial offerings of food, cigarettes and betel nut sent in the form of Seraheng, an arrangement created by leaves of the sago palm. This procession is led by the Melanau elders.

In up-river Melanau towns such as Dalat and Medong, they celebrate Pesta Kaul by participating in traditional canoe races and other river sports. However, in more modern times, they can often be seen racing power boats instead.

One of the famous traditional festivals of Sarawak is Gawai Antu, celebrated by the Iban. The name Gawai Antu means “Festival for the Departed Souls”. It is an occasion to honour those who have passed away since the previous Gawai Antu.

Gawai Antu is a rare event, held only once every generation for any longhouse. As Gawai Antu is held in extremely high prestige by the Iban community, it is a festival that people cannot partake in without an invitation. So if you get invited, be sure you don’t miss the chance to attend!

There is no fixed date for the celebration, and due to its expensive nature, it takes at least one to two years to prepare for the ceremony. However, due to the time pressures of the modern age, it is usually held in December to coincide with the longest Malaysian school holidays.

The origins of Gawai Antu are linked to the Iban legend and hero Sarapoh. He was the first to propagate the traditional rites of death and mourning. The spirit Puntang Raga reached out to Sarapoh after the death of his parents to teach him how to prepare their bodies for burial and the proper mourning rituals. These rituals continue to this day.

They begin with the longhouse chief holding a meeting to inform the other occupants of his intention to hold the Gawai Antu. The festival will only happen if everyone in the longhouse agrees. The chief descendant of the eldest deceased person is appointed as Feast Chief. He will then delegate work to different households to do before, during, and after the festival.

During Gawai Antu, the Iban celebrate the dead through significant memorialisation rituals. It is a day of traditional dance, song, feasts, and cockfighting. Many rituals involve the drinking of tuak and are led by the longhouse elders. The festival ends with the erection of the sungkup (memorial hut) on every grave.

The Iban celebrate Gawai Antu to complete the final transformation of the dead into merantu (spirits). This festival also establishes the dead in a longhouse of their own. It provides them with the means for a self-sufficient existence, independent from the world of the living.

Gawai Antu is a festival that all Iban people must celebrate at least once in their lives. Failure to do so may deem them as disloyal to their people.

Pesta Nukenen is a celebration of the cultural heritage of the Bario Highlands region of central Sarawak that is home to the Kelabit. Not only is getting to Bario Highlands an experience on its own but if you make the effort at this time, you will also be joining one of the best food festivals that Sarawak and probably the world offers!

The dates differ from year to year, so be sure to keep an eye out for when Pesta Nukenen will be held in 2020. Visit sarawaktourism.com/events for more information.

For several years now, the Kelabits have been organising Pesta Nukenen to showcase their tradition and culture. There are dances, singing, traditional games, plenty of activities, and as you’d expect, a wide array of good food. The people of Bario hold this festival so the world can experience their culture and get to know them and their customs. The best part is that it is all free.

The hiking trails and rainforests in the Bario Highlands mean you have plenty of organic activities to get involved in and work off all that good food. You can trek up the highest national park in Sarawak at Pulong Tau, or even stargaze at night and marvel at how little light pollution there is. But as progress finds its way to every corner of the globe, who knows how long it’ll stay so special?

Pesta Nukenen helps preserve the heritage of Bario Highlands as one of the last traditionally farmed and forested highlands in Sarawak. It also shows the world the beautiful and colourful culture of the Dayak Kelabits.

Last but not least, there is the Borneo Cultural Festival held in Sibu, a short flight from Kuching. BCF, as it is commonly known, is celebrated by Sarawakians from all walks of life. It is a celebration filled with traditional food, and multicultural dance and music. BCF happens every year sometime between July to August, and it is open to anyone.

The Sibu Municipal Council (SMC) first organised BCF in 2005. Besides food, dance, and music, there are also contests, beauty pageants, food stalls, funfairs, and product exhibitions. This colourful and vibrant festival draws a crowd of approximately 20,000 every year.

BCF is a one-week long festival highlighting the diverse cultural backgrounds of Sibu, which has become a cultural melting pot for many Iban, Bidayuh, Orang Ulu, Malay, Melanau, and Chinese. It is celebrated to promote the “Beauty in Ethnic Diversity” within Borneo and to the world.

Known as one of the biggest festivals in Sarawak, this is definitely one festival that you wouldn’t want to miss! It is the perfect opportunity to experience the diverse culture of Sarawakians firsthand.

Unless you live in Sarawak, it may be difficult to attend all of these amazing festivals but at least one should be on everyone’s bucket list for 2020. 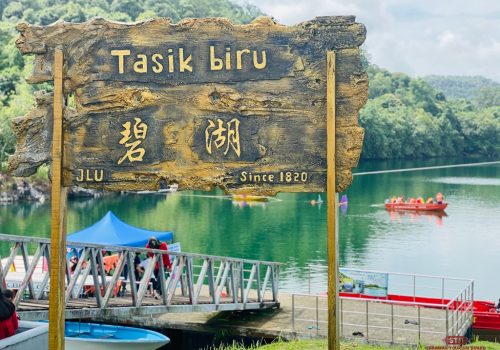 Get to know more about Sarawak’s Tasik Biru festival!

In the previous article, we mentioned the beautiful diving destinations Sarawak has to offer. Everyone knows there are many water…