Fort Sylvia is a fort built in 1880 and renamed after Rani Sylvia Brooke, wife of Rajah Charles Vyner Brooke, in 1925. The fort’s whitewashed walls and ironwood shingled roof are home to a mini-museum and handicrafts centre managed by the by Tun Jugah Foundation.

The Tun Jugah Foundation was given the responsibility of conservation and renovation works, which commenced immediately and was completed by December 1998.

Fort Sylvia is the predecessor of an earlier fort known as Fort Baleh built in 1874 between Kanowit and Song. It was built to thwart Iban expansion upriver which was creating conflicts with the Orang Ulu tribes.

In 1880, it was replaced with Fort Sylvia which today serves as a museum with a fine collection of artefacts and historical documents. It also houses a collection that pays tribute to Tun Jugah ak Barieng – one of Sarawak’s foremost independence leaders.  It houses a fine collection of ethnic arts and handicrafts, heirloom jars, brass cannons and historical documents, and a collection devoted to the life of the late Tun Jugah ak Barieng, Temenggong (supreme chieftan) of the Rejang Iban and one of Sarawak’s foremost independence leaders.

There are quite a number of exhibits displayed in the museum:- 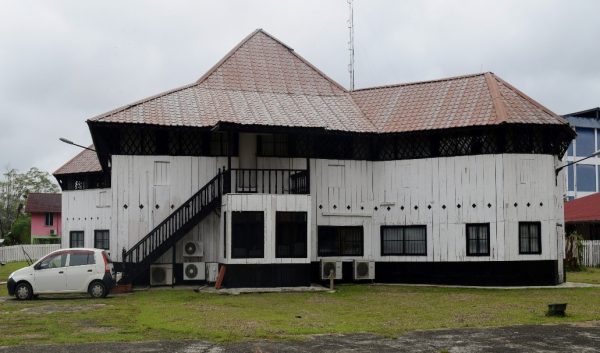 The Forts opening hours are as follows:

Express boat from Sibu to Kapit

3 different seat classes to choose from (front, middle and back of the express boat)
Fares: RM25, RM30 & RM35
Takes about 3 hours, dependent on water levels

Once in Kapit, the town can be navigated on foot.