March 21, 2012 | Estimated reading time: 8 minutes
In Sarawak, a visit to an authentic longhouse is considered a must.

In the Central Region of Sarawak, an Iban longhouse is one of  the main attractions for tourists. Several other ethnic groups traditionally live in longhouses, so expect a variety of ways in which you are welcomed. Traditionally the Iban do not shake hands to welcome visitors. Today, though, this is highly acceptable.

Longhouse headmen are respectfully addressed as “Tuai Rumah”.  Hence, when addressing him during conversations, he should customarily be addressed as “Aya (uncle) Tuai Rumah”.
Each longhouse is led by a Tuai Rumah. He is usually appointed by his own group of people; the criteria for selection include leadership qualities and success in life.
In the olden days, more was required. He needed to present proof of his bravery – a human skull or two would suffice as  credentials. This was when head-hunting was rife.  Succession was fairly straight-forward. Usually the eldest son takes on the mantle of headman if he possesses the same leadership qualities, and has the trust of his community.  If this isn’t possible, the post goes to a younger sibling, or next-of-kin such as an uncle or cousin.

Thus the Tuai Rumah is not a dictator, as we understand in accordance to the definition what it is today.  His decision in all matters affecting his anembiaks (those under his leadership) is usually final but only after they are consulted. A good Tuai Rumah is exemplary in all his activities, a sterling example for his anembiaks.  Therefore, close rapport and dialogues, known as randau ruai (which means general conversation conducted in the longhouse verandah) is a daily affair, particularly in the evening. Normally, each longhouse is  named after the Tuai Rumah.

NgajatCultural Dance (Ngajat) – The Iban community is known for several  forms of cultural dances. In longhouse functions, the most popular dances are the Ngajat Ngelalu Pengabang (Welcoming Dance) and Ngajat Bujang Berani (Warrior Dance). Both men and women dancers are decked in full traditional costumes.

Sometimes, visitors are invited to join in. Be sporting enough to try. Poor footwork? You won’t be penalised. Don’t miss this wonderful experience.

Tuak (Rice Wine)“Tuak” (Rice wine) – Tuak is brewed from glutinous rice (pulut) and yeast (ragi). First, the yeast is dried, while the  glutinous rice is soaked for up to ten hours. In olden days, this glutinous rice will be cooked in bamboo. In the heating process the bamboo cylinders will be repeatedly turned over until the rice  is fully cooked. The cylinders are then turned upside down to drain the water to ensure that the rice will not become stale even over a long period of time. After a few hours, the rice  is taken out and spread out evenly on a mat.

Fermentation begins by mixing the rice thoroughly with yeast. Then, the rice is  placed into a glazed earthenware jar. Make sure the jar has never been used for storing sour or salty food.
Before being used, the jar has to be washed thoroughly and left to dry.  The first brew (ai suling) should be ready after a fortnight.  It is extracted and bottled.  For a more potent brew, many Ibans keep them on racks above the fireplace in the kitchen.

Miring ceremony For the Ibans, the “Miring” (offering) ceremony is meant to make wishes known to  departed ancestors. It is to seek their protection and for the smooth organising of events. Usually, this ceremony is led by elders or VIPs.

The Iban normally have their meals in the main room; seated in a circle. Rice and accompanying dishes are served on plates or bowls.  It’s self-service – pile on whatever you want onto your plate. Just make sure there are no leftovers. So it’s best to have a little to start with. Go for seconds later. Sometimes the host provide extra helpings later on if he senses your hesitance during the meal time.  You will be excused for not finishing this extra helping.

Small talk is encouraged during meals. No vulgarities please. Your host is especially delighted to see you have a good appetite.

NgelanganThe Iban community practises several different ways of welcoming important guests. One is Ngelangan. It involves a ceremony before the guest enters a sort of tunnel festooned with pua kumbu (traditional woven fabric). Accompanied by the headman, the guest walks the length of the longhouse before taking his seat in the verandah.

RanyaiDuring Gawai Dayak (Harvest Festival) or any other festival held in the longhouse,  you will witness an intriguing dance around  bountiful trees known as the “ranyai”. The ranyai tree is usually made of nipah and is stationed in the middle of the verandah. Food and drinks are hung on it.
Visitors are invited to dance around the tree, select a food item, retrieve it, before taking a seat. It all climaxes with the felling of the tree, symbolising a bountiful harvest.

PUA  KUMBU The “pua kumbu” is a popular native handicraft of the Ibans. It literally means a blanket or a coverlet.  Weaving Pua KumbuThis colourful cloth, woven with intricate combinations of various designs and colours, however, serves more significant meanings other than that of providing covering.

In the olden days, the “pua kumbu” was very much an integral part of the day-to-day affairs and special rituals of the Iban society.  One or more pieces of “pua kumbu” are being hung prominently in the midst of joyous gatherings such as harvest festivals or weddings. For solemn events, such as farming rituals or healing ceremonies, the “pua” is used to veil structures containing charms and offerings to the gods.  When head-hunting was still a much-valued tradition of the Ibans, the “pua kumbu” are used by the ladies to receive the “prize” brought home by their warriors.

Modern Iban society now have more contemporary uses for the “pua kumbu”.  Cushion covers, handbags and wall hangings are some of the novel uses of this particular craft.

SOME DO’s AND DONT’s

What’s the best way to plan a holiday when the whole world is on offer? Many travellers pick a country:… 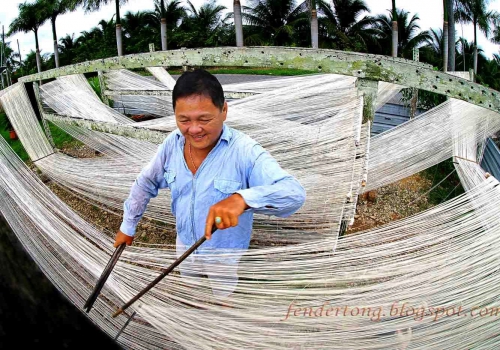 Longevity noodles* and the art of making them is kept very much alive in Sibu. The art is driven as…

Tripping in Borneo: It’s a rumble through the jungle