October 13, 2012 | Estimated reading time: 4 minutes
The northern region of Sarawak is home to the ‘Orang Ulu’ tribe; a collective name to represent the various ethnic sub-groups. They include the Kelabits, the Lun Bawang, the Berawans and the shy and semi-nomadic Penans. In the region above Kapit and the Pelagus Rapids, the Orang Ulu people literally known as “upriver people”, consists of the Kayans, Kenyahs, Kajangs, Lahanans and the Punans. The Kayan sub-group forms the largest among them.

The majority of the Kelabit tribe are found in the Kelabit Highlands.  The highland is a series of beautiful mountain valleys lying slightly over 1,000m above sea level and flanked by jungle-covered peaks rising to more than 2,400m. The climate is probably the most pleasant in Sarawak, although it can become quite chilly in the evenings. The Kelabits and the neighbouring and closely-related Lun Bawangs produce the fragrant and much sought-after Bario (Adnan) rice. Both groups are branches of the Orang Ulu, and live in a combination of longhouses and individual units that are widely dispersed throughout the area. They are friendly, hospitable people and enjoy receiving visitors.

Bakelalan (formerly Ba’ Kelalan) is a remote settlement, home of the Lun Bawang ethnic group. The village is famous for its apples and organic vegetables, and their musical ‘bamboo band’. The village is connected to Lawas and Miri by air, and it is also possible to travel there via a combination of existing and old logging roads. There is a hot spring with resort accommodation at Merarap, about 68 km from Lawas town where a pleasant beach, 7-km away at Punang can be found.

The Batang (river) Baram, Malaysia’s (and Sarawak’s) second longest river, drains much of the northern region, and also is home to many of the Orang Ulu sub-groups. Much of the Baram region is inaccessible, but there are some fascinating attractions in the region. There is the famous Gunung Mulu National Park and the lesser-known Loagan Bunut National Park known for its disappearing lake. Other places of interest to visitors include the small riverside town of Marudi, the bustling Kenyah community at Long San and the delightful Kayan longhouse community of Long Bedian; the amazing Tenyok Rimba waterfall is nearby.

Some Kayans in the Sungai Asap Resettlement programme, Belaga (3-hour drive from Bintulu) are involved in homestay programme. They also organise game fishing trips in the Bakun lake; an area the size of Singapore.

Like the Ibans, the Orang Ulu are also former head-hunters but they live in even more imposing longhouses than the former. Also, their arts and crafts are very different. The Orang Ulu especially the Kayans and Kenyahs are known for their woodcarving, beadwork, spectacular ‘keliring’ or totem poles and the music of the hauntingly beautiful lute instrument – the ‘sape’. Tattooing and body ornamentation are prominent; older ladies can be recognised by the brass rings hanging from their extended earlobes and from the dense dark tattoos on their arms and legs, a practice that is disappearing from the younger generation.

With the MCO coming to an end, but international travel still way too uncertain, it’s time to explore Malaysia and…

Bario Highlands: The Heart of Borneo

Imagine waking up to a delightful cacophony of tropical birdsong. But wait, if this is the tropics, why is the… 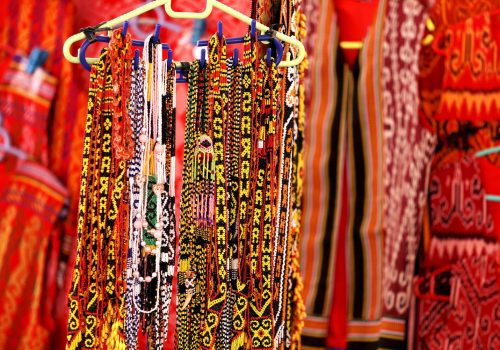 Little Known Secrets of the Beads of Borneo